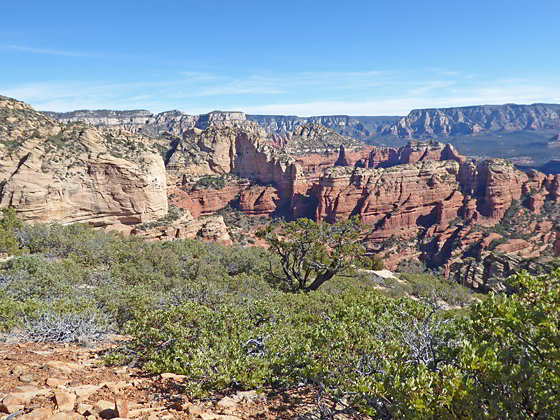 View of Fay Canyon from the trail

Nonstop views accompany this strenuous trail climbing the southern slopes of Bear Mountain. From the summit enjoys vistas of the red rock formations, deep canyons and peaks rising to the south and west along with the San Francisco Peaks to the north.

Why Hike to Bear Mountain

This scenic trail climbs steeply up a series of plateaus to a summit atop Bear Mountain with terrific views the entire way. Wilson Mountain, Capitol Butte and Fay Canyon, along with nearby red rock formations, fill the skyline to the east. Casner and Black Mountains rise above the canyons to the west. The landmarks rising above Sedona and Oak Creek Canyon are seen to the southeast while the Verde Valley dominates the view to the south.

The flat summit, clad in trees and bushes, is somewhat anticlimactic but still sports some fine views. To the west/southwest vistas encompass colorful Red Canyon along with Casner and Black Mountains. To the north are distant views of the San Francisco Peaks. The Verde Valley and the red rock formation around Sedona and Oak Creek Canyon fill the skyline to the south.

The trail comes with its own geology lesson, passing through Schnebly Hill Sandstone, Fort Apache Limestone, Coconino Sandstone and then ending up atop a Kaibab Limestone island.

Best aware that sections of this strenuous trail are very steep and rocky. Minor exposure along short sections of the trail may make some hikers uncomfortable. Pick a day full of promise and get an early start. The trail is mostly exposed to the sun and can get very hot. 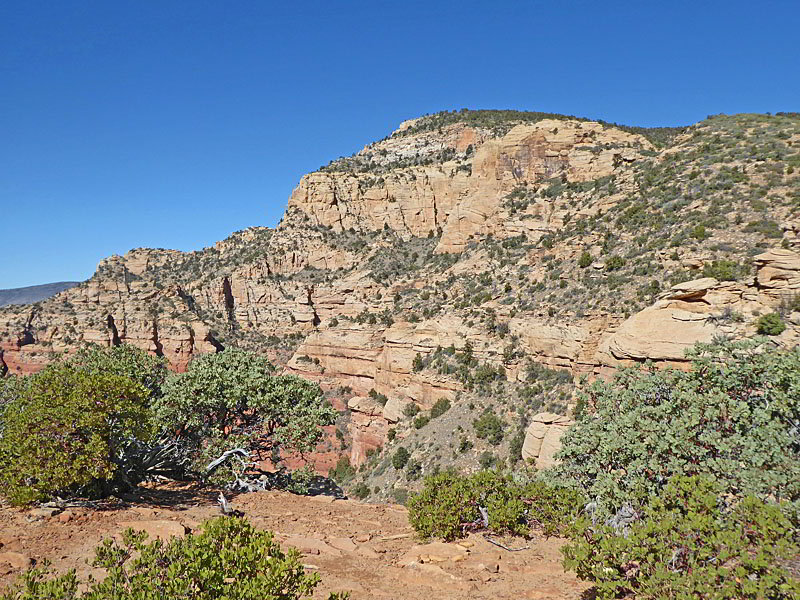 From the Bear Mountain/Doe Mountain trailhead parking area, located on the southeast side of the Boynton Pass Road (see driving directions below), cross to the northwest side of the road to the start of the Bear Mountain trail. Step over a fence and then travel along an undulating path through meadows scattered with cacti, yucca and junipers. Along the way the trail crosses three dry gulches and passes the boundary of the Red Rock – Secret Mountain Wilderness.

After 0.3 miles the path reaches the base of the mountain. The narrow trail now climbs steeply up rocky slopes and a rugged gully, gaining over 450-ft. to the first bench. This segment of the hike travels through the Schnebly Hill Formation, which is a thick layer of red to orange-colored sandstone. The layer is capped with a lighter Fort Apache Limestone.

The grade abates at 0.7 miles as the trail curves around the west side of some colorful pinnacles. The climb soon resumes, ascending northwest on moderate to moderately-steep grades beneath rugged crags and pinnacle along the east side of a narrow canyon. Near the head of the canyon the trail curves to the left (west). Here views stretch south across the Verde Valley to Kushmans Cone, House Mountain and the Black Hills.

The path now ascends steeply up the valley’s headwall on rocky switchbacks. The grade eases as it reaches a saddle. The respite is short-lived as the path curves to the right (north) and climbs on very steep grades up a rocky ravine to a broad plateau at 1.2 miles. The bushy plateau boasts a healthy population of manzanitas. Here you will see both Schnebly Hill Sandstone and Coconino Sandstone.

The ascent resumes at 2.0 miles with the trail climbing steeply up slickrock slabs with more great views. A tenth of a mile beyond the path dips into a saddle and then starts its final stiff climb up brushy slopes to the summit of Bear Mountain. Turn around for great views of the route we climbed toward the summit. Sedona and its distinctive red rock formations are seen to the south.

Reach the end of the trail, marked with a brown stake, atop a summit of Bear Mountain (6,470-ft.) at 2.4 miles. The Kaibab Limestone summit is flat, broad and covered in forest and shrubs. Walk a short distance northwest beyond the end of trail sign to the Red Canyon overlook, an open area along the western edge of the summit. From here views stretch northwest toward Casner Mountain. Below the overlook is the aptly named Red Canyon. The parking area along the west side of the canyon is the Palatki Heritage site.

Paths thread through the vegetation to a northern viewpoint with distant vistas of the San Francisco Peaks. The thick vegetation atop the summits is a tad frustrating, limiting views to the east. Work your way to the south side of the summit for fine views of Sedona, the Verde Valley and the Black Hills.

When you are done taking in the views retrace your steps to the trailhead, enjoying the great views on the return journey.

Driving Directions from Sedona: From the traffic circle at the intersection of Arizona State Roads 89A and 179 head west on Arizona 89A for 3.0 miles and then turn right (north) on Dry Creek Road. Follow Dry Creek Road for 2.0 miles to an intersection. Here Dry Creek Road turns right. We continue straight ahead on the Boynton Pass Road for 2.5 miles to an intersection. Turn left to continue on Boynton Pass Road for 1.2 miles and then turn left into the Bear Mountain/Doe Mountain Trailhead parking area. The Bear Mountain trail starts across the road.

Note: a Red Rock Pass, America the Beautiful Interagency Pass, Golden Age Pass or Golden Access Pass is required to park in the lot. Red Rock Daily passes are $5, weekly passes are $15 and annual passes are $20. There is a machine at the parking area to purchase the pass. The passes can also be purchased in many shops around Sedona or online.