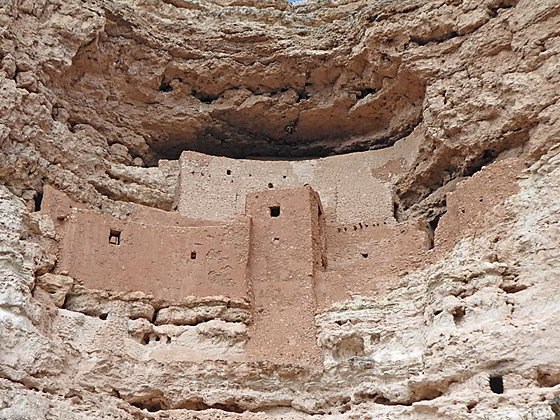 A very interesting Sinagua cliff dwellings is the highlight of this small National Monument near Camp Verde, Arizona. Montezuma Wells, a detached unit of the Monument, is also worth a visit. The large sinkhole harbors Sinagua ruins and a small lake with a unique habitat and hydrology.

Montezuma Castle is an interesting, well-preserved five-story cliff dwelling near the town of Camp Verde, Arizona. The 19-room structure was built 90-feet above the valley floor in a deep alcove in the sheer limestone cliffs along Beaver Creek. Ladders were originally used to access the site.

The ruins and surrounding area were occupied by the Sinaqua people between the 12th and 14th centuries. As many as 6,000 to 8,000 people may have lived in small villages around the valley and farmed the land. Around 1380 the Sinagua people started leaving the area. No one knows why.

The monument includes a visitor center and picnic area. A short 0.4 miles trail, starting at the visitor center, circles the area beneath the cliff dwelling and offers great views of the structures from different vantage points. The path, shaded by Sycamore trees and planted with cacti and other species native to the high desert area, also passes the remains of a ground level pueblo. 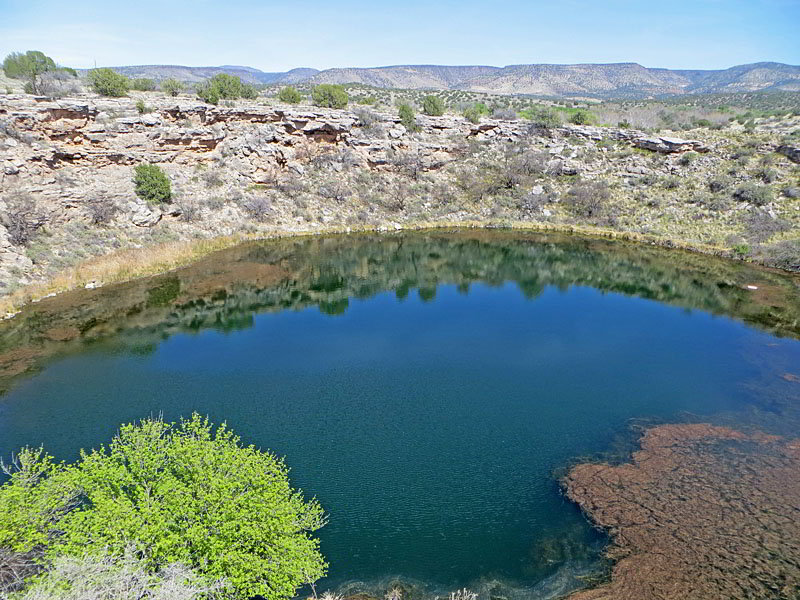 Montezuma Well, a detached unit of the Montezuma Castle National Monument, is located 5 miles north of the monument near Rimrock, Arizona and well worth a visit. The natural limestone sinkhole, measuring 300-ft. by 360-ft., is 55-ft deep and partially filled with a small lake fed by water flowing from an underground source. The water enters the well at 74-degrees year-round with a flow of over 1,400,000 to 5,600,000 gallons per day.

On its way to the well the water passes though limestone formations where it collects arsenic and large amounts of dissolved carbon dioxide, more than 100 times the levels found in most natural aquatic environments. Fish can’t live in water with such high levels of carbon dioxide. As a result the small lake in the well contains a unique community of species including algae, Amphipods - tiny shrimp like animals that feed on the algae and leeches and water scorpions that feed on the Amphipods. This feeding cycle only occurs at night.

During the day the well is a tranquil, riparian oasis visited by visit by birds and local wildlife such as muskrats, pond sliders and the Sonoran mud turtles. These species feed off the algae and the pondweed growing in the carbon dioxide-rich waters.

Along the water line at the southeast end of the well is an opening. Here lake water overflows into the opening and drops through a long, narrow cave. The water reappears along the base of the limestone cliff to the east of the well where it flows into a ditch lined by sycamore trees. Some of the water then flow from the ditch into Beaver Creek. 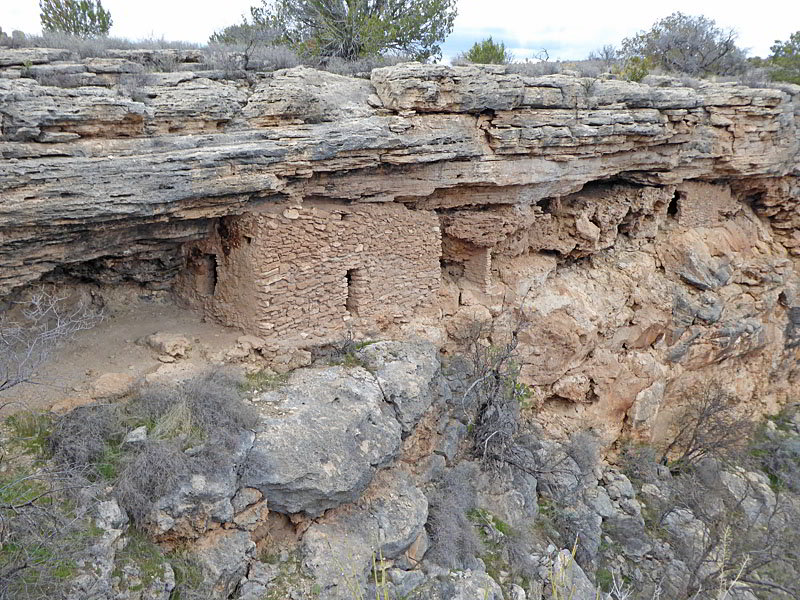 Tucked into the walls of the sinkhole are cliff dwellings and other small Sinagua structures. The high desert area around the sinkhole contains surface ruins of pueblo structures. A pit house along the access road to the Well is now protected with a metal roof and is open to the public.

From the Montezuma Wells parking area a 0.6 miles trail, that is initially paved, ascends a series steps to an overlook along the southwest end of the sinkhole. Near the overlook a spur trail descends 50-feet into the Well. As you descend enjoy good views of the structures tucked into an alcove just below the sinkhole’s west rim.

At the southeast end of the sinkhole is another viewpoint that looks across the lake to the ruins. Just to the east of the overlook is a surface ruin. An unpaved path now drops down the slopes to the east of the sinkhole a junction. At the junction turn left on a spur trail. This path leads to the opening at the bottom of the channel draining the lake. Here the water spills into a narrow irrigation ditch above Beaver Creek. The pretty area is lined with Sycamore trees.

Return to the junction and follow the path as it curve to the left (west/northwest) and travels through desert terrain back to the parking lot.

Driving Directions from Sedona to Montezuma Castle NM: From the traffic circle at the intersection of State Routes 89A and 179 head south on Arizona 179 S for 14.3 miles and then turn right and merge onto I-17 S toward Phoenix. In 8.7 miles take exit 289 for the Middle Verde Road. (You will also see signs for Montezuma Castle National Monument.)