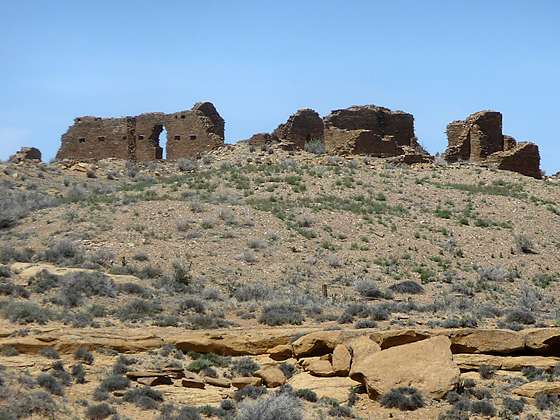 Leave the crowds behind on this nice walk visiting a Chacoan Great House. Along the way the trail views the rock art sites along the Petroglyph Trail and passes the “Supernova” pictograph site. 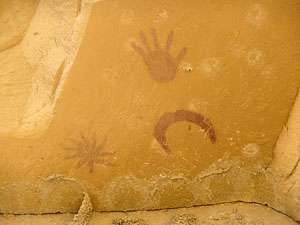 Penasco Blanco is one of the four backcountry trails in Chaco Culture National Historic Park (Chaco Canyon). The trail starts at the northwest end of the Pueblo Del Arroyo parking area. (See driving directions below.) Here you will find a kiosk where you should fill out a free hiking permit.

From the kiosk follow the old dirt road northwest along the right (northeast) side of Chaco Wash, passing Kin Kletso at 0.3 miles. The route travels through the Chaco scrub covered floodplain populated predominately with salt brush and greasewood plants. Along the wash you will see a profusion of tamarisk.

The road skirts a shallow wash and arrives at the Casa Chiquita site at 1.1 miles. The unexcavated site, built in AD 1100, was originally two-three stories high and consisted of 50 rooms.

Beyond Casa Chiquita the road ends and the trail begins. Follow the trail as it makes a few detours to visit petroglyph sites along the cliff face. The panels contain a mix of Anasazi, Navajo and Mexican inscriptions. Some of the sites are quite faded and hard to see. Others along the trail have suffered defacing from vandals. Please treat all ruins and rock you encounter with respect. Never touch the rock art or try to take tracings.

As you continue heading northwest on the main trail views open to Penasco Blanco atop the West Mesa. At 3.0 miles the trail turns west and crosses Chaco Wash. You should not cross the wash during high water. It is best to check at the Visitor Center prior to starting this hike. When wet the wash can be lined with slippery mud and full of quicksand.

The trail climbs the bench on the other side of the wash and continues over to the base of the West Mesa’s cliffs. Here you will find some faint petroglyphs and the Supernova pictograph, consisting of an image of concentric circles, a crescent moon, sunburst and human hand painted in red against a yellow background. (The Supernova pictograph is directly above the petroglyphs protected by a shallow overhang.) Some believe the pictograph depicts a supernova, or exploding star, in the Crab Nebula that was recorded by Chinese astronomers in AD 1054.

The unexcavated Great House of Penasco Blanco was up to three stories high and contained 160 rooms. The southeast room blocks, the oldest section of the ruins, date from AD 913 to 916. An expansion around AD 1050 to 1065 added massive room blocks at each end of the structure. Another spurt of construction between 1075 and 1095 included a symmetrical room blocks with enclosed kivas along the rear of the structure and four enclosed kivas fronting the plaza on the west wing. A final addition constructed single story rooms that enclosed the plaza. The various types of masonry work of the walls of the ruin reflect the evolution of the building styles at Chaco.

There are two great kivas in the plaza of Penasco Blanco and two more outside the complex to the south and northwest. These great kivas were among the earliest structures at Chaco. One of the kivas at the complex was burnt three times and rebuilt twice. Tree ring dating places the reconstruction of the kiva at AD 516 and 557.

In addition to the buildings in the complex archaeologist have found evidence of a water control system near the ruins that included canals, ditches, headgates and storage ponds. The system collected storm water runoff and distributed the water to fields along the Chaco wash.

From the ruins enjoy fine views to the southeast down the length of Chaco Canyon and to the north where the huge Escavada Wash meets the Chaco Wash. After exploring the ruins retrace your steps back to the trailhead.

Before returning to your car, take time to explore Kin Kletso. The ruin, constructed between AD1120 and 1130, is a compact rectangular unit. It was built relatively late in Chaco’s construction history, during a time when the architecture of the great houses was changing. The layout lacks the D-shaped floor plan, enclosed plaza, great kiva and other features associated with Pueblo Bonito and the earlier Chacoan Great House. The masonry style more closely resembles that of the Mesa Verde region, reflecting a sharing of ideas and customs with Chaco’s neighbors to the north. 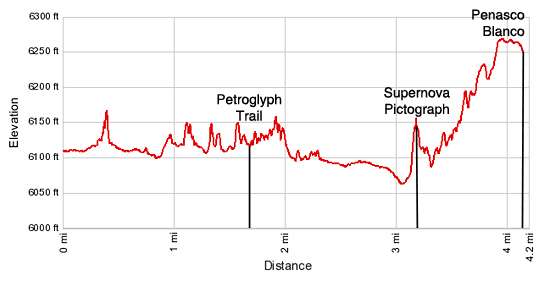 From Bloomfield, NM: Head south on US 550 S for 39 miles and turn right on County Road 7900. The turn is 3 miles southeast of Nageezi and is marked with a large brown sign for Chaco Canyon. Follow CR 7900 for 5.1 miles and then turn right onto County Road 7950, also signed for Chaco Canyon. Travel on CR 7950 for 15.9 miles to the park boundary. Note. After turning off US 550 the first 8 miles of the route is paved and the next 13 miles are on rough dirt road. The final 4.5 miles of CR 7950 before entering the park are very rough.

Upon entering the park the road surface turns from dirt to pavement. Follow the paved park road for 2.5 miles to the Visitor Center (right) where you should pay the park entrance fee and pickup information about the park.

To reach the Penasco Blanco trailhead, turn right when exiting the visitor center, continuing up the main park road for a tenth of a mile to the start of the one way loop road. Follow the loop road for 3.6 miles to an intersection. At the intersection go straight ahead toward Pueblo del Arroyo / Kin Kletso. (Turning left follows the loop road back to the Visitor Center.) Drive 0.4 miles to the end of the road and park in the lot designated for Pueblo del Arroyo and Kin Kletso.