This hike climbs to a high point on the South Mesa to visit Tsin Kletzin, a Chacoan Great House. Along the way the hike enjoys nice vistas of the surrounding country as well as the fine views of great houses located at the western end of Chaco Canyon. 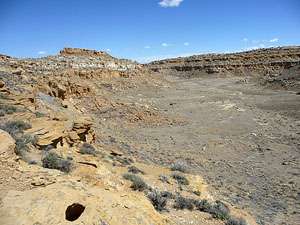 This loop hike can be walked in either direction. I prefer to hike the loop in a counter-clockwise direction, ascending the mesa from South Gap and then visiting Tsin Kletsin. Parties with limited time should simply do the 3.4 mile out-and-back hike to Tsin Kletsin, which start at marker #10 along the Casa Rinconada interpretive path, climbs the South Mesa and heads directly to the ruins.

Note: The trail mileage for this hike includes a loop through the Casa Rinconada Complex on the interpretive path.

To hike the loop in the counter-clockwise direction, follow the Casa Rinconada interpretive path to marker #10, the start of the trail to Tsin Kletsin. Turn right and continue along the interpretive path. Before the trail reaches the next stop, the Great Kiva, you will find a sign for the South Mesa Loop trail indicating that is 2.6 miles to Tzin Kletsin. Turn left onto the loop trail. If you have walked through the ruins and visited the Great Kiva, you will have walked about a half mile to reach this point.

The boot beaten path heads west along the base of the South Mesa. At 0.6 miles the trail bears left onto a dirt service road. Here you will see a sign, “Return Trail,” pointing in the direction of the Casa Rinconada interpretive trail. This sign is meant to keep people on track who are walking the loop in the clockwise direction.

The service road continues paralleling the mesa and then curves to the left (southwest) at 0.9 miles into the South Gap, the drainage cutting between the South and West Mesas. An ancient Chacoan road once passed through the South Gap providing major access to the Chaco from the south.

At 1.5 miles turn left (southeast) off the road onto a boot beaten path heading toward the South Mesa. A brown mylar sign marks the South Pass trail at the turn. Soon the trail curves to the right into a small canyon formed by a long narrow ridge extending from the west side of the mesa.

The trail ascends along the east side of the canyon, gaining 150-ft. as it climbs to the head of the canyon, topping the ridge at 2.2 miles. Fine views from the ridge top extend north down the canyon and southwest toward West Mesa.

The trail now turns left (east) and ascends along the spine of the ridge to the top of South Mesa. Once on the mesa the boot beaten trail follows an ascending traverse east/southeast through sparsely vegetated flats scattered with junipers. As you gain elevation views open to then mesa running along the north side of Chaco Canyon. Arrive at Tzin Kletzin after hiking 3.0 miles.

The D-shaped ruin, constructed around AD 1112, contained 70 rooms and featured an enclosed plaza and a row of long, rectangular rooms along the back of the structure. The masonry work is of the McElmo style seen in other structures built during the same period.

The northern rectangular section of the ruin includes two kivas that were two stories tall. From the top of the highest kiva views extended to Penasco Blanco, Kin Kletso, Casa Chiquita, Pueblo Alto and Kin Klizhin, a small Chacoan great house that lies about 7 miles southwest of the immediate Chaco Canyon area. If you moved the high point 30-ft in either direction you will lose sight of these structures. The lines-of-sight with the other Great Houses might well explain the location of Tzin Kletzin.

After exploring the ruins follow the loop trail as it heads north, descending on easy grades across the mesa toward Chaco Canyon. After walking about 4 miles you will notice a canyon opening to your right (east). This is Werito’s Rincon, one of the larger side canyons in the park. During exploration of the area archaeologist discovered a large masonry dam used to store water above the rincon not far from Tsin Kletzin.

Soon the trail starts dropping down a series of ledges and rocky slopes on moderately steep grades to the valley floor. Along the way enjoy great views of the ruins across the canyon, including Pueblo Bonita and Chetro Ketl. To the north atop the mesa is Pueblo Alto. Below is Casa Rinconada. Reach the junction with the Casa Rinconada Interpretive trail at 4.6 miles. From here it is an easy quarter mile walk back to the parking area.

From Bloomfield, NM: Head south on US 550 S for 39 miles and turn right on County Road 7900. The turn is 3 miles southeast of Nageezi and is marked for Chaco Canyon with a large brown sign. Follow CR 7900 for 5.1 miles and then turn right onto County Road 7950, also signed for Chaco Canyon. Travel on CR 7950 for 15.9 miles to the park boundary. Note. After turning off US 550, the first 8 miles of the route is paved and the next 13 miles are on rough dirt road. The final 4.5 miles of CR 7950 before entering the park are very rough.

Upon entering the park the road surface turns from dirt to pavement. Follow the paved road for 2.5 miles to the Visitor Center (right) where you should pay the park fee and pickup visitor information. To reach South Mesa, turn right as you exit the visitor center and continue up the main park road for a tenth of a mile to the start of the one-way loop road. Follow the loop road for 3.6 miles to an intersection. Turn left at the intersection and continue along the loop road for 0.3 miles to the parking area for Casa Rinconada on the right (south) side of the road. The South Mesa trail branches off the interpretive path around the ruins at marker #10.