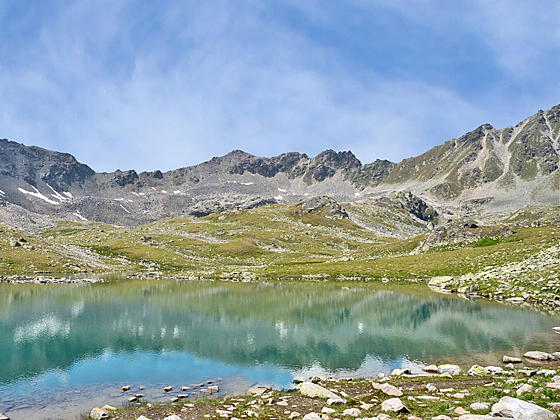 Lake Immez in the Macun Lakes

This trail ascends the Zeznina Valley to the gorgeous Macun Lakes in the Swiss National Park. The glacial lake basin lies nestled beneath a rugged cirque high above the Lower Engadine Valley. Extend the hike with a challenging climb to the Baselgia Ridge and a very steep descent to Zernez.

The Macun Lakes were added to the Swiss National Park in 2000. Hikers making the steep climb up the Zeznina Valley to the basin will immediately understand why this unique area merited National Park status. Over 20 lakes and tarns lie cradled in a beautiful glacial basin beneath a rugged cirque of 10,000-ft. peaks.

The hike to the basin is accompanied by fine views of the high peaks towering above the north side of the Lower Engadine Valley. Upon reaching the basin, a loop trail travels by the three largest lakes before rejoining the main trail back to Lavin.

Fit, surefooted hikers up for a challenge can extend the hike by climbing to the Fuorcletta da Barcli (9,347-ft.), a saddle on the Baselgia Ridge. As you ascend the summits of the Engadine Valley form the backdrop for magnificent views of the basin. At the pass, vistas open to the high peaks to the west/southwest of Zernez.

From the saddle, climb to a high point on the ridge (9,662-ft.) with views that now include the peaks gracing the skyline to the west. Leave the National Park as you drop off the ridge and descend on very steep to moderately-steep grades down the flanks of Munt Baselgia to Zernez.

Don’t attempt the climb to the ridge under snowy or icy conditions unless properly equipped. Pick a day full of promise and turn around if the weather takes a turn for the worse. The ridge is not the place to be during a thunderstorm.

Lavin to the Macun Lakes

Take the train from Scuol to Lavin (see trailhead directions below). Exit the train station and turn right (southwest) on Pra-San Jorg Strasse (street). Follow the street until it ends at Via Maistra. Turn right (southwest) on Via Maistra. The road soon crosses the Lavinuoz River on a bridge. Turn left on Plaz Strasse, the first street after the bridge. Walk one block and then bear left on Tanter/Auas, which crosses the river again on a bridge and soon become Suot Roven Strasse.

The track passes barns and a home and then becomes a two-track. Soon you will see trail signs on the left (east) pointing to Alp Zeznina Dadaint, Macun and Zernez. Turn left and ascend wooded slopes on moderate grades. At all intersections continue toward Alp Zeznina Dadaint and Macun.

At 1.9 miles crosses the Aua da Zeznina (Zeznina stream) on a wood bridge. On the east side of the river the trail turns right (south) and starts climbing moderately-steep to steep switchbacks through a larch/pine forest up the east side of the Zeznina Valley to Alp Zeznina Dadoura at 2.8 miles.

Past the Alp the path ascends on moderate grades through forests and intermittent meadows. At 3.4 miles the trees give way to meadows and we reach the stone cottage of Alp Zeznina Dadaint at 3.6 miles. Turn around here for fine views stretching north across the Lower Engadine Valley to the high peaks, including the glacier-clad Piz Buin, rising above the Tuoi and Lavinuoz Valleys.

The trail now climbs steeply up pastures and rocky meadows. At 4.1 miles the path starts ascending a series of switchbacks, passing a trail branching left toward Murtera at 4.7 miles. Beyond the junction the switchbacks continue climbing up rocky meadows and scree covered slopes.

At 5.5 miles the trail crosses the stream and then ascends on easy grades across a narrow bench, passing a small tarn along the way. Reach a junction on the bench at 5.7 miles. Here a boot beaten path, branching right, travels by the tarn and then ascends to the Macun Lakes (35-min).

I recommend continuing up the main trail toward the Macun Lakes (10-min), Fuorcletta da Barcli (1-hr) and Zernez (4-hr 15-min). The trail ascends along the west side of the stream and enters the Swiss National Park. Ahead views open to the gorgeous Macun Lakes basin, composed of more than 20 lakes and tarns nestled beneath a rugged cirque of 10,000-ft. peaks.

Reach a junction at 6.0 miles along the north shore of beautiful Lai d’Immez, one of the larger lakes in the basin. Here a trail branches right, traveling along the north shore of Lake Immez and then curves to the right (north), passing along the east shores of Lai da La Messa Gluna and Lai dal Dragun. Beyond Dragun the path descends to the small tarn and the junction we passed at 5.7 miles. After looping around the lakes retrace your steps down the Zeznina Valley to Lavin for a 12.7 miles round-trip hike.

To continue to Fuorcletta da Barcli (Barcli Pass) and Zernez, cross Lake Immez’s outlet stream on a bridge and then climb steeply up rocky meadows and scree slopes to Fuorcletta da Barcli (9,347-ft.), a saddle on the Baselgia Ridge, at 6.8 miles. The climb is accompanied by splendid views of the Macun Lakes basin. From the saddle, the summits of the Silvretta range towering beyond the Lower Engadine Valley fill the skyline to the north. To the south Piz Quattervals and the high peaks rising above the Cluozza and Spol Valleys dominate the view.

At the saddle, turn right (west) and ascend along the rocky ridge. The trail is marked with red and white slashes on the rocks. Reach the high point (9,662-ft.) of the hike at 7.0 miles. This is truly an amazing overlook with views extending southwest to the high peaks towering above the Fluela Valley. Glacier-clad Piz Sarsura is easy to pick-out on the skyline. To the north are more great views of the Macun Lakes Basin and the peaks rising above the Lower Engadine Valley.

When you are done taking in the views, follow the trail as it turns left (southwest), exits the National Park and then descends on very steep grades through scree and rocky meadows to a saddle on the ridge to the north of the summit of Munt Baselgia at 7.5 miles. Drop off the saddle, descending steep switchbacks down rocky meadows along the west facing slopes of Munt Baselgia.

At 8.9 miles the grade abates a bit as the descent continues down switchbacks through meadows that give way to forested slopes. At all junctions follow the signs to the Zernez train station. Pass under electric lines at 11.6 miles and then drop through forest and then pastures to the eastern edge of Zernez at 12.6 miles. Signs now point the way through the village to the train station at 13.2 miles.

From Scuol to Lavin: Take the train from Scuol toward Pontresina or Landquart and get off at Lavin. The ride takes about 20 minutes. Consult the SBB Website/SBB app for the current schedule.