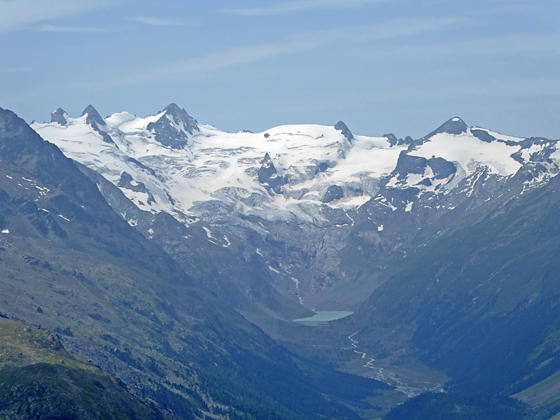 Close-up of the peaks at the head of Val Roseg

The Segantini Hut, high above Pontresina in the Bernina Valley, offers birds-eye-views of the summits soaring above the Roseg, Morteratsch and Upper Engadine Valleys.

This short, popular hike features scenic views of the Muragl Valley and panoramic vistas from the historic Segantini Hut, perched atop a ridge high above the northeast side of the Bernina Valley. From the hut, views stretch south up Val Roseg to the Roseg, Sella and Tschierva glaciers spilling down a dramatic cirque rimmed by 3,000-meter peaks. Piz Bernina soars above the head of the ridge separating the Roseg Valley from the Morteratsch Valley to the east.

Competing for your attention are the rugged peaks of the Albula Alps towering above the Upper Engadine Valley to the west/northwest. St. Moritz and its namesake lake lie along the valley floor beneath the towering summits.

Sections of the trail are steep but manageable for most hikers. The hut, now a restaurant, offers refreshments. Alternatively, pack lunch and continue along the ridge a short distance beyond the hut to find a picnic spot with front row seats to the stunning views.

Hikers comfortable with narrow, rugged trails with some exposure can continue beyond the hut on an airy trail with more spectacular views of the Bernina Valley. See the Muottas Muragl to Alp Languard hike for more information.

Hiking to the Segantini Hut

Take the Muottas Muragl Funicular from the Punt Muragl Talstation (bottom station) to Muottas Muragl (8,051-ft.). (See trailhead directions below). Overlooks near the exit of the funicular station offer stunning views of the Albula Alps, dominated by Piz Julier and Piz Ot, towering above the northwest side of the Upper Engadine Valley. St. Moritz, Celerina and Samedan lie nestled along the valley floor.

To the south views extend up Val Roseg to the high peaks of the Bernina Alps, including Piz Bernina, Piz Scerscen, Piz Roseg and Piz Gluschaint, to name a few. To the east/southeast, Piz Vadret and Piz Muragl fill the skyline above the Val Muragl (Muragl Valley).

After enjoying the views find the trail signpost behind the funicular station and head southeast toward Chamanna Segantini (Segantini Hut). The trail descends on moderate grades through pastures, passing Alp Muottas along the way. At 0.9 miles the grade abates as the path reaches the floor of Val Muragl and passes a small building. Ignore the trail to the right that drops to Punt Muragl and Samedan.

On the other side of the bridge pass a trail branching right (west) and descending to Unterer Schafberg, Alp Languard and Puntraschinga (a Romansh derivation of Pontresina). Our trail toward Chamanna Segantini now climbs a series of steep switchbacks up to the ridge extending northwest from Munt da la Bes-cha. At 1.6 miles the switchbacks end and the trail curves to right, continuing its steep climb toward the ridge crest.

As you ascend enjoy ever improving views of Piz Ot and the peaks lining the head of the Val Saluver to the west of Celerina. To the north, Piz Kesch, Piz Cotschen and nearby peaks form the backdrop for Muottas Muragl.

To south are wonderful views of Piz Roseg, Piz Scerscen, Piz Sella and Piz Gluschaint rising above the head of Val Roseg. Piz Bernina, Piz Zupo and Piz Palu soar above the Morteratsch Valley to the east of Val Roseg.

The trail now climbs steeply up the broad ridge crest to the Segantini Hut (8,960-ft.) at 2.1 miles. The hut, now a restaurant, is named after a famous artist that painted and died here in 1899. From the hut and surrounding area enjoy breathtaking views of the Bernina massif, Val Roseg, the Upper Engadine Valley and the Albula Alps. Beyond the hut the path travels on easy grades along the ridge, passing some nice places to sit and take in the views at 2.25 miles.

From St. Moritz: From the St. Moritz Bahnhof, take the #1 bus toward Samedan, which stops at Punt Muragl (the bottom station of the Muottas Muragl Funicular), located in Val Bernina to the northwest of Pontresina. There are other bus routes that stop at Punt Muragl leaving from St. Moritz, St. Moritz Bad and Pontresina. Get bus information from the local tourist office, the Engadine Bus Routes page or the SBB website/SBB app to find the closest stop to your accommodations.