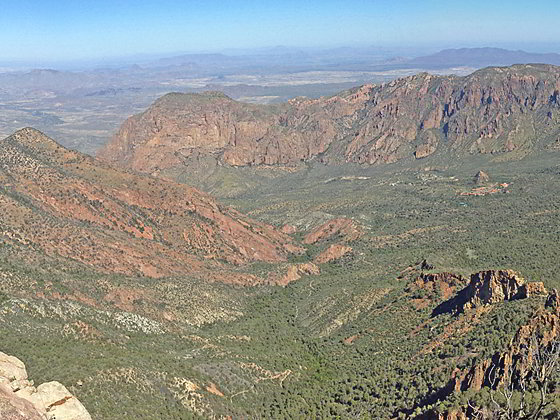 View of the Basin from the summit

Hikers making the strenuous climb to the summit of Emory Peak are rewarded with stunning, panoramic views of Big Bend including the Chisos Range, the Rio Grande from Boquillas Canyon to Santa Elena Canyon, the Sierra Quemada and the vast Chihuahuan Desert. 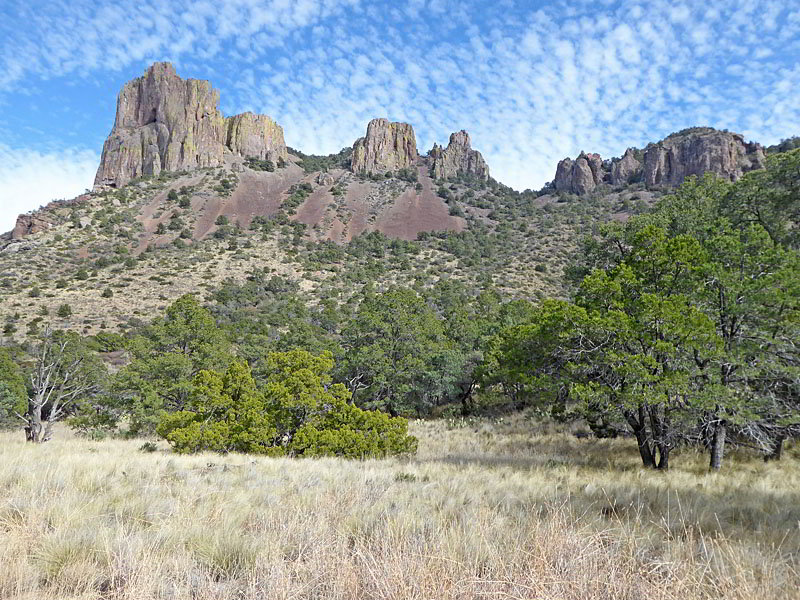 Emory Peak (7.825-ft.) is the highest summit in the Chisos Mountains, a rugged range in the heart of Big Bend National Park. The shortest path to the summits leaves from the Chisos Basin and ascends the Pinnacles trail to a saddle between Emory Peak and Toll Mountain at 3.5 miles. A short distance beyond the saddle the 1.5 mile (one-way) Emory Peak trail climbs to the summit of Emory Peak with superb views of the park.

This is a very popular hike, so don’t expect solitude. I strongly recommend getting an early start on this hike to take advantage of the cooler temperatures and the morning shade along the north face slopes. An earlier start also results in less people atop the peak.

The trail to Emory Peak starts at the Chisos Basin Trailhead near the Visitor Center. (See driving directions below). The path heads south/southwest through brush for 0.3 miles to the junction of the Pinnacles and Laguna Meadows trails. Here we turn left on the Pinnacles trail, which is also signed for Emory Peak.

At 0.9 miles the trail curves to the right (south) and the grade abates as the trail passes through beautiful Juniper Flat, a grassy open area with terrific views of Casa Grande. Spur trails lead to a few campsites. Soon the climb resumes.

At 1.4 miles the grade again moderates as the trail reaches the junction with a spur trail in Boulder meadows camping area. Here our path curves to the right (southwest). 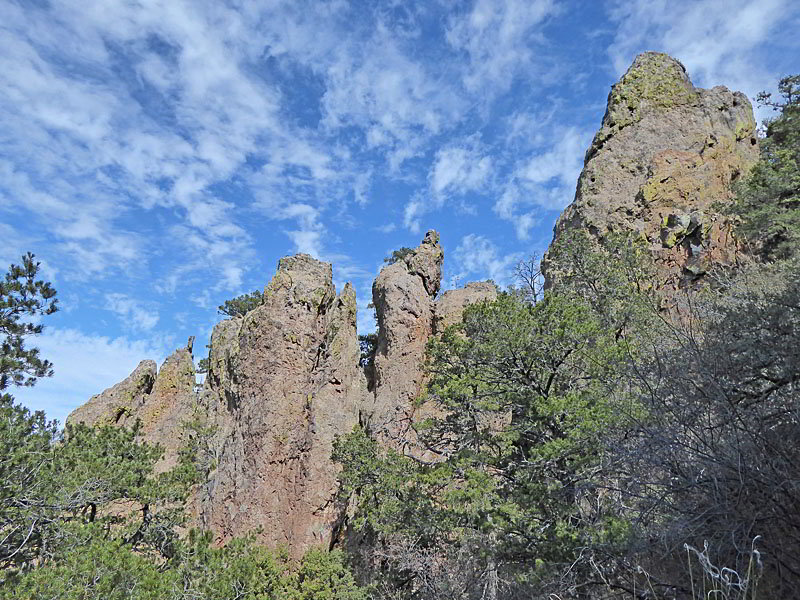 The grade steepens at 2.0 miles and soon starts switchbacking up the northeast facing slopes of a ridge. As the trail climbs it passes beneath jagged volcanic pinnacles, hoodoos and interesting rock formations.

At 3.5 miles the trail reaches a saddle between Emory Peak and Toll Mountain. Here we have more fine views of the peaks towering above the north/northwest side of the Chisos Basin. A short descent soon leads to the junction with the Emory Peak trail, branching right (south). Near the intersection are bear boxes and a bathroom.

Turn right and ascend the Emory Peak trail on moderate to moderately steep grades. The path zig-zags up forested slopes and open, rocky hillside clad in scrub brush. Openings offer views of the basin to the north, Crown Mountain rising above Juniper Canyon to the east and Boot Canyon to the south.

At 4.5 miles the path curves to the right and ascends steeply up the rugged slopes beneath the peak’s east ridge. Ahead views open to Emory Peak. The last section of the trail climbs up grassy slopes and then through some trees to the base of the two summit blocks of Emory Peak. The northern block is the highest and the one you want to climb. Here hikers must scramble up a very steep, exposed rock face, clad in large boulders, to the summit. This part of the hike is not recommended for anyone with a fear of heights or exposed trails.

At 5.0 miles reach the top of Emory Peak with 360-degree panoramic views. Toll Mountain, Casa Grande, Lost Mine Peak, and Crown Mountain dominate the views to the northeast. Peak 6905 and Vernon Bailey Peak tower above the basin to the north while Peak 6847 rises to the northwest. In the distance are the Christmas Mountains.

To the south views extend to the South Rim of the Chisos Mountains, the Rio Grande and into Mexico. The Chihuahuan desert stretches west/southwest to the Sierra Del Carmen Mountains and mouth of Boquillas Canyon. On a clear day you should be able to chart the course of the Rio Grande, a thin green line, from Boquillas Canyon in the east to Santa Elena Canyon in the west.

The rocky summit of the peak, which is not very large, is home to a solar panel and radio antennas that are part of the park’s two-way radio system. The equipment does get in the way of some of the views but is necessary to facilitate communications within the park.

After enjoying the views, carefully descends the boulders and then retrace your steps to the trailhead for a 10.0 mile round-trip hike.

From the Big Bend National Park Headquarters at Panther Junction: From Panther Junction, at the intersection of the Persimmon Gap Road and the West Entrance Road, head west on the West Entrance (Gano Springs) road toward Basin Junction for 3.2 miles. Turn left on the Chisos Basin Road and follow the road for 6.3 miles to the Chisos Basin Visitor Center and park. The Chisos Basin trail starts along the west side of the parking area, just to the south of the Convenience store.