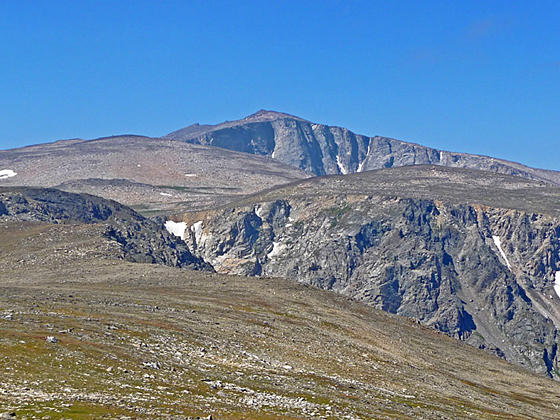 This interesting and scenic hike ascends through the Silver Run Lakes basin and then climbs atop the Silver Run Plateau, an amazing tundra-clad expanse of rolling terrain over 10,000-ft. The first 2.75 miles of the hike follow the Timberline Trail through a burn area.
See Trail Detail/Full Description

It’s hard to describe the feeling one gets atop the 10,000-ft. Silver Run Plateau. As you crest the plateau you enter a treeless realm, a vast tundra-clad expanse of rolling terrain punctuated with a few rocky summits. The trail slowly fades, replaced by large cairns marking the route across the plateau. No a soul is in sight, you have this amazing place to yourself.

The trail to the plateau initially climbs the Timberline Trail through a burn area. At 2.75 miles the trail splits and we ascend the Bear Track trail into the Silver Run Lakes basin, rimmed by the plateau’s sheer cliffs. Near the head of the basin switchbacks climb steeply to the top of the plateau.

Keep an eye on the weather. The plateau is not the place to be during the thunderstorm. Also, don’t try to cross the plateau during fog. The cairns are had to see during low visibility conditions.

Other Hiking Regions in:
Montana