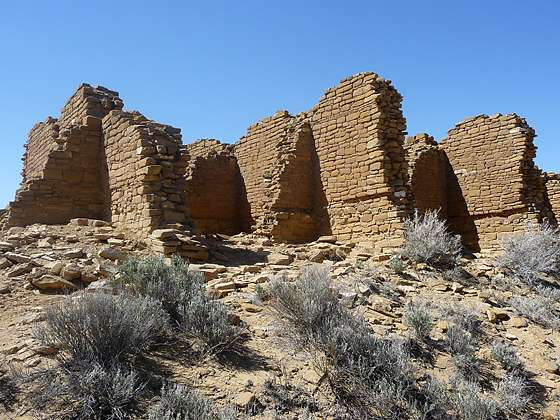 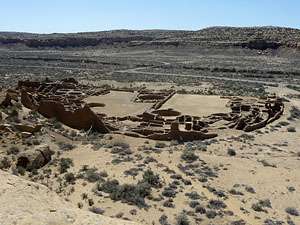 Pueblo Alto is the most popular of the four backcountry trails in Chaco Culture National Historic Park (Chaco Canyon). The trail starts at the northwest end of the Pueblo Del Arroyo parking area. (See driving directions below.) Here you will find a kiosk where you should fill out a free hiking permit.

Note: The mileage in the description of this hike includes the walk up the road to the official beginning of the hike along with side trips to view the ruins.

Walk up the dirt road for 0.3 miles to the Kin Kletso Great House and then head to the back of the ruins where you will find a sign for the Pueblo Alto/Pueblo Bonito trail near the base of the cliff. The trail ascends steeply up a rocky slope along the cliff and then climbs a narrow crevasse in the cliff face to the top of the mesa on the north side of the canyon in 0.1 miles. You will probably need to use your hands at times as you clamber around large boulders.

Atop the mesa enjoy fine views that stretch across Chaco Canyon to south and west. To the southeast on the valley floor is Pueblo del Arroyo. Follow the trail, marked by rock cairns, as it travel across slickrock along the edge of the mesa top. At 0.6 miles find two round basins carved in the slickrock. Many of these basins are located along the cliff edges around Chaco. The basins are frequently surrounded by masonry walls 25 to 100-ft. in diameter. How these basins were used is still not known. Not far beyond is a Stone Circle, another Chacoan mystery.

After walking one mile reach the junction with the Pueblo Bonito Overlook trail. This short spur trail goes to the mesa rim right above Pueblo Bonito at 1.1 miles. The bird’s-eye view of this Great House is really amazing and offers a much greater appreciation of the layout of the structure.

After enjoying the view of Pueblo Bonito continue along the main trail. In a short distance reach the beginning of the loop trail. Straight ahead (north) is the trail to the Pueblo Alto Complex. The trail to the right (east) heads toward the Chetro Ketl viewpoint. I prefer to walk the loop in the counter-clockwise direction, traveling along the rim to the Chetro Ketl viewpoint before visiting the Pueblo Alto Complex. Either way works. Parties looking for a shorter out-and-back hike (3.8 miles round-trip) will want to head directly to Pueblo Alto.

To hike the loop in the counter-clockwise direction, turn right (east) and follow the trail as it continues its traverse along the rim. The walk is quite scenic, with views of the sandstone formation atop the mesa and the ruins in the valley floor competing for your attention.

At 1.6 miles a short spur trail leads to the Chetro Ketl Overlook, a great viewpoint directly above this Great House. From the vantage point you can see kivas and internal rooms that are not visible when touring the structure at ground level.

Past the viewpoint continue along the rim for another half mile. At 2.1 miles the trail turns left (northeast) away from the rim and begins an ascending traverse across the mesa on easy grades. A brown mylar marker indicates where the trail climbs a narrow slot between two large boulders to the top of the next bench on the mesa at 2.4 miles.

Follow the trail, marked with rock cairns, as it travels along the rim of the upper bench. At 2.9 miles the route turns left (west) and arrives at a sign for the Jackson Stairs. This impressive set of Chacoan stairs are carved into the sheer cliff at the head of the rincon and are part of a road leading from Chetro Ketl to Pueblo Alto. The stairs are named after William Henry Jackson, a photographer in the 1877 Hayden Survey.

Beyond the stairway the trail continues along the rim for half a mile and then heads off across the mesa toward Pueblo Alto. Soon views open to Pueblo Alto in the distance. As you approach the complex you will pass the unexcavated East Ruins that are cordoned off with chains. Look to the south across the valley and you will see the outline of a structure against the skyline on the south mesa, this is Tsin Kletsin, another Chacoan Great House.

Reach the Pueblo Alto complex at 3.8 miles. The complex is composed of six structures, only four of which are visible. Pueblo Alto, the largest of the ruins is the only structure that has been excavated. East Ruin, which you passed on the trail, Rabbit Ruin to the north and New Alto to the west remain unexcavated.

Initial construction of Pueblo Alto coincides with the construction of Chetro Ketl (AD 1020-1050). While many of the Great Houses at Chaco are multi-story, Pueblo Alto was only one story. Excavation work did not uncover a kiva anywhere in the complex, which is another oddity. Archaeologists have found evidence of four roads from the north that converge at Pueblo Alto as do roads from Chetro Ketl, Pubelo Bonito and Penasco Blanco.

The two story Mc Elmo style New Alto structure to the west was built around AD 1100. The ruin contained 58 rooms arranged around a kiva. The structures has been stabilized but not excavated.

A network of trails around the Pueblo Alto and New Alto ruins allow for an intimate examination of the structures. After seeing the reconstructions of the Great Houses in the valley it is quite interesting to observe what ruins look like prior to reconstruction and excavation.

After exploring the ruins return to the loop trail and head south, descending a wide dirt trail on moderately easy grades. In a short distance pass a slickrock ramp that was part of a Chacoan Road. A little further along a sign points out a section of Chacoan steps that were part of the road.

Reach the junction of the loop trail with the path descending back to the valley at 5.0 miles (excluding the distance you traveled while exploring Pueblo Alto). Turn right (west) toward the parking lot, retracing your steps along the rim and down the narrow crevasse to the valley floor. Total round trip distance for the hike is 6.0 miles (including side trips).

Before returning to your car, take time to explore Kin Kletso. The ruin, constructed between AD1120 and 1130, is a compact rectangular unit. It was built relatively late in Chaco’s construction history during a time when the architecture of the great houses was changing. The layout lacks the D-shaped floor plan, enclosed plaza, great kiva and other features associated with Pueblo Bonito and the earlier Chacoan Great House. The masonry style more closely resembles that of the Mesa Verde region, reflecting a sharing of ideas and customs with Chaco’s neighbors to the north. 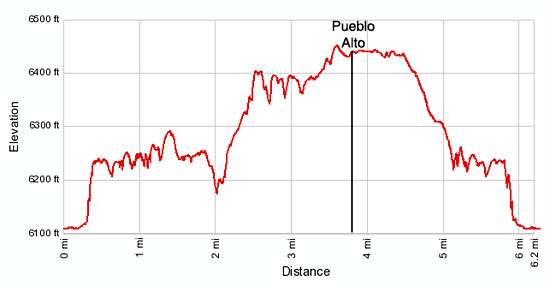 From Bloomfield, NM: Head south on US 550 S for 39 miles and turn right on County Road 7900. The turn is 3 miles southeast of Nageezi and is marked for Chaco Canyon with a large brown sign. Follow CR 7900 for 5.1 miles and then turn right onto County Road 7950, also signed for Chaco Canyon. Travel on CR 7950 for 15.9 miles to the park boundary. Note. After turning off US 550, the first 8 miles of the route is paved and 13 miles are on rough dirt road. The final 4.5 miles of CR 7950 before entering the park is very rough.

Upon entering the park the road surface turns from dirt to pavement. Follow the paved road for 2.5 miles to the Visitor Center (right) where you should pay the park visitor fee and pickup park information. Exit the visitor center and turn right, continuing up the main park road for a tenth of a mile to the start of the one way loop road. Follow the loop road for 3.6 miles to an intersection. At the intersection go straight ahead in the direction of Pueblo del Arroyo / Kin Kletso. (Turning left continues along the loop road and back to the Visitor Center.) Drive 0.4 miles to the end of the road and park in the lot designated for Pueblo del Arroyo and Kin Kletso.