near Saas Fee in The Valais 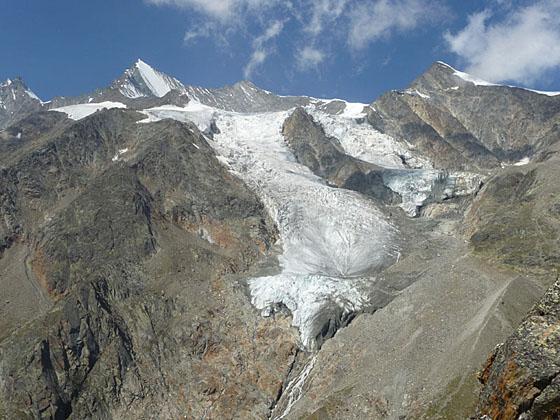 Two lofty overlooks offer impressive bird’s-eye views of the glacial cirque surrounding Saas Fee, the Hohblam Glacier and the Fletschhorn-Weissmies group. The return to Saas Fee features views of the Bider Glacier and a walk through a pretty forest. 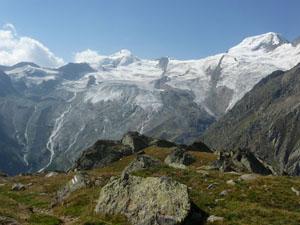 Take the gondola to Hannigalp (7,677-ft.). (See trailhead directions below.) From the overlook near the lift station enjoy wonderful views of the 13,000-ft. (4,000-meter) peaks defining the glacial cirque surrounding Saas Fee. To the south the Fee Glacier clings to the flanks of the Allalinhorn and Alphubel while waterfalls, fed by glacial meltwater, gush down the mountainsides. The Taschhorn, Dom and Lenzspitze tower overhead. To the northeast, the Fletschhorn, Lagginhorn and Weissmies fill the skyline above the Kreuzboden area.

Start the hike at the signpost behind the lift station. Head right (north/northwest) toward Mellig (1-hr), ascending moderately-steep switchbacks up a wide dirt/gravel road. As you climb enjoy ever improving views of the peaks surrounding Saas Fee. To the south views extend up the Almageller and Furgg Valleys.

At 0.9 miles the road ends and a trail branches right (north/northwest), ascending a series of steep, tight switchbacks through rocky meadows. Views soon open to the Hohbalm Glacier spilling down the flanks of a cirque formed by Lenzspitze, the Nadelhorn and the Ulrichshorn.

The grade eases at 1.25 miles and reaches Mellig (8,858-ft.) at 1.35 miles. This vantage point offers stunning view of the glacial cirque surrounding Saas Fee and the Hohbalm Glacier. To the north are distant views of the Bernese Alps rising above the Rhone Valley. If you are lucky you may spot ibex climbing the steep rocky slopes near the viewpoint.

Many people turn around at this point and return to Hannig for a 2.7 mile round-trip hike. From Hannig extend the hike by walking back to Saas Fee via the Gemsweg (from Hannig to the Gletschergrotte) for a 6.7 mile hike. I suggest leaving the Gemsweg for another day and continuing on to Gibidum, another great overlook.

To reach Gibidum, follow the trail as it descends along the rocky spine of a ridge extending northwest from Mellig and then drops down to and crosses a grassy saddle. From the saddle the path climbs very steeply to Gibidum (9,039-ft.) at 1.8 miles. The lofty overlook features panoramic views extending from the Furgg Valley in the southeast to the peaks rising above the Rhone Valley to the north. Across the valley to the east the Fletschhorn, Lagginhorn and Weissmies dominate the view while the Saas Fee glacial cirque fills the skyline to the south. Above the viewpoint to the southwest, the Hohbalm Glacier spills down rugged slopes.

This is another turn around point. Return to Hannig for a 3.6 mile hike or combine the hike to Gibidum with the Gemsweg from Hannig to the Gletschergrotte for a 7.6 miles hike. If you have time to do the Gemsweg another day I suggest continuing the hike to Balmiboden and then back to Saas Fee.

To continue the hike, walk northeast in the direction of Balmiboden (1-hr 5-min) and Saas Fee (2-hr 10-min). The trail drops steeply down the rocky slope below the lookout and then descends on moderate grades across a broad grassy ridge.

At 2.2 miles the grade steepens as the trail descends rocky meadows on switchbacks. Soon views open northwest to the tip of the Bidergletscher (Bider Glacier).  Along the way enjoy every improving views of the glacier, cradled along the slopes of the Gemshorn and the southeast face of Balfrin.

The trail curves to the east at 3.0 miles and descends on moderate grades along rugged slopes clad in meadows and low-lying shrubs, crossing a few boulder fields along the way. Be sure to turn around for views of Balfrin rising above the Bidergletscher. At 3.4 miles the trail curves to the northwest and then drops down a series steep switchbacks.

The grade eases as the trail reaches Balmiboden (6,955-ft.) at 3.7 miles. Turn right (southeast) toward Saas Fee (1-rh 5-min). The trail now descends on moderate grades and soon enters the forest. Openings in the trees offer nice view of the peaks rising along the east side of the Saastal (Saas Valley).

At 4.2 miles reach a junction at Senggboden.  Bear right toward Saas Fee. At a clearing a short distance beyond arrive at a second sign for Senggboden that points straight ahead to Saas Fee.

After a short uphill stint the trail drops steeply through trees. At the next junction there are two routes listed to Saas Fee. Either way will get you back to Saas Fee. This hike takes the trail toward Melchboden and Saas Fee. (See the directions below for the alternate route.)

The trail now heads south ascending on easy grades through forest, reaching a gravel road at 4.8 miles. Descend along the road on moderate grades. At 5.2 miles the road curves east/northeast, passes a small pond and then arrives at Melchbode at 5.3 miles.

Beyond Melchbode, the track turns south/southeast and drops to a “Y” intersection on the outskirts of Saas Fee. Take the trail to the right, marked as Carl Zuckmayer Weg, which passes between two houses on the northern edge of Saas Fee. Several walkways now head south toward downtown Saas Fee. When in doubt, walk in the direction of the signs pointing toward Dorfzentrum (town center) or the Tourist Information Bureau, which is located near the bus station. Reach the center of Saas Fee at 6.4 miles.

Instead of taking the route marked for Melchboden/Saas Fee, continue straight ahead following the sign listing only Saas Fee. At Barenfalle (6,178-ft.), stay on the trail toward Saas Fee Post (30-min), which crosses a dirt road and then continues downhill, skirting a horse corral to join a broad dirt track. This track eventually turns into a wide dirt lane which goes by several exercise stations before coming to houses on the outskirts of Saas Fee.

At a “Y” intersection take the walkway marked as Carl Zuckmayer Weg that passes between two houses on the northern edge of Saas Fee. Walkways now head south toward downtown Saas Fee. When in doubt, walk in the direction of the signs pointing toward Dorfzentrum or the Tourist Information Bureau, which is located near the bus station. Reach the center of Saas Fee after walking 6.4 miles 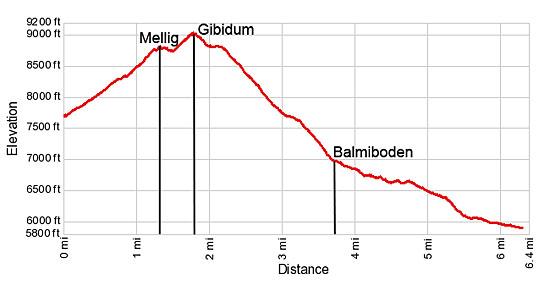 To the Hannig Gondola in Saas Fee: This hike starts by taking the Hannig Gondola to Hannigalp. From the Saas Fee Bus Terminal at the Post Platz, head west/northwest on Obere Dorfstrasse to a “T” intersection. Turn right on Bielmattstrasse. Follow Bielmattstrasse for one block and turn left on Bielmattweg. (The Hotel Garni Domino Gabriel Bumann is at the corner.) Follow Bielmattweg to the “T” intersection and take a right on Hannigstrasse. Walk a little over 100-ft. up the street to the Hannig gondola station. There are trail signs along the route directing you to the lift.