near Zermatt in Valais 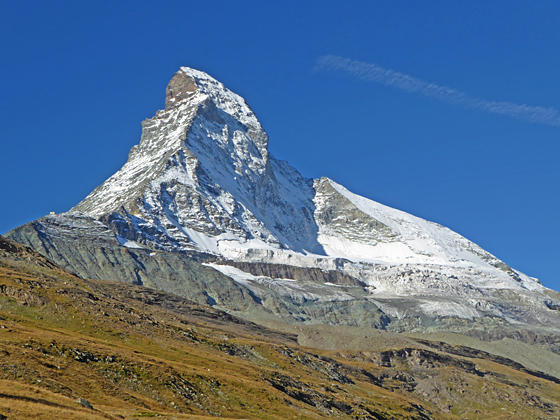 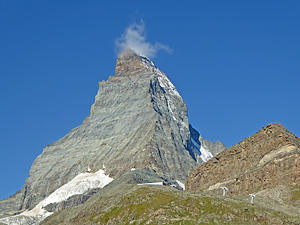 Note: This hike starts on the Matterhorn Plateau at Schwarzsee, reached by taking the Matterhorn Paradise / Schwarzsee Gondola. If you choose to walk from Zermatt to Schwarzsee add four to five miles (depending on the route) and 3,100-ft. in elevation gain to the hike. (See trailhead directions below.)

Schwarzsee (8,490-ft.), a popular viewpoint, is located on the Matterhorn plateau beneath the Matterhorn’s northeast ridge known as the Hornligrat – considered to be the easiest route to the summit. From the viewpoint visitors are treated to expansive views of the Matterhorn’s east and north faces. Hornlihutte, the basecamp for climbers tackling the Hornligrat, is clearly visible at the base of the ridge.

When you are done taking in the views find the signpost near the Hotel Schwarzsee (accommodations and restaurant) where markers point to broad track descending northwest across the plateau toward Stafelalp (25-min), Schonbielhutte (3-hr 20-min) and the Matterhorn Trail. Follow the track as it drops through meadows sprinkled with wildflowers, passing a pretty little chapel near a tarn. Herds of blacknose sheep are often seen grazing in the meadows.

After walking 0.75 miles stunning views open to the Matterhorn’s sheer north face and the Matterhorn glacier. This view, from different perspectives, will be your constant companion for much of the hike. Across the valley the Ober Gabelhorn massif and Dent Blanche dominate the view. As you continue descending views of the peaks and glaciers at the head of the Zmutt Valley join the scene.

Reach the signed junction at Stafelalp (7,900-ft.) after walking 1.2 miles. Just beyond the sign take the trail branches right (northwest) toward the Matterhorn Trail and Schonbielhutte, which descends on moderate grades through Obere Stafelalp’s pretty meadows dotted with low lying shrubs and wildflowers.

The meadows soon give way to a scattered forest of larch and pine trees as the trail passes a small pond at 1.5 miles. Beyond the pond the grade steepens. Clearings now offer views of the settling ponds and buildings on the valley floor that form part of the Grande Dixence hydroelectric system.

The trail soon crosses a stream and then descends to the Stefelalp Restaurant (7,214-ft.) at 2.0 miles. Near the restaurant signs points left (west) toward Arbenbach and Schonbielhutte and right (east) to Zmutt and Zermatt.

Return via the South Side of the Zmutt Valley

Along the way it is possible to cross the dam over the Zmuttbach and then descend through Zmutt on the way back to Zermatt (south end of town). This option also results in a 5.6 mile hike. Add 0.8 miles to the hike if you are walking all the way back to the Bahnhof (train station) at the north end of Zermatt. (Note: Watch for mountain bikes along the service roads.)

Return via the North Side of the Zmutt Valley

My advice is to turn left at the junction toward Arbenbach and Schonbielhutte and return to Zermatt via the north side of the valley. The trail, which is longer and includes an additional 300-ft. in elevation gain, is more scenic with great views of the Matterhorn in addition to the high peaks towering above the Findel Glacier and the Gornergrat area.

After turning left at the junction the trail descends on a broad track to a junction with a dirt road at 2.2 miles. Turn left onto the dirt road in the direction of Arbenbach and Schonbielhutte. The Matterhorn’s north face now towers overhead. Several waterfalls, fed by glacial meltwater, tumble down crevasses in the cliff face below the Matterhorn Glacier. Straight ahead to the west are nice views of the peaks and glaciers at the head of the valley.

At 2.5 miles turn right at a junction on the track heading toward the hydroelectric project. The turn is marked by two yellow arrows with hiker icons. Our path now leads through an unattractive area housing hydroelectric buildings and equipment along with settling ponds amid the gravelly remains of the receding Zmutt Glacier. Signs near the buildings describe the immense Grande Dixence hydroelectric project.

The area around the hydro project is an unfortunately an eyesore. Divert your attention from the man-made structures by turning around for more great views of the Matterhorn. To the east the Oberrothorn, Rimpfishhorn, Strahlhorn and Adlerhorn tower above the Findel Glacier while Monte Rosa rises beyond the Matterhorn Plateau. Across the valley a pretty waterfall tumbles down a rock outcropping. The trail to Schonbielhutte climbs switchbacks up the right side of the falls.

A short distance beyond the hydroelectric building cross a bridge and follow the track as it skirts the right (east) side of a large settling pond. Just beyond the settling pond turn right (east) on a track marked with a yellow slash on a rock. This trail will cross a bridge and reach a signed junction at 3.0 miles. Turn right at the junction toward Chalbermatten, Zmutt and Zermatt. The trail to the left leads to Schonbielhutte and Arbenbach.

You are now on a new trail that detours around a rock slide. Follow the path as it heads southeast, descending through larch trees. At 3.3 miles reach a bridge crossing the Zmuttbach (Zmutt River). Do not cross the bridge but instead go left (east/northeast), following the trail as it drops around the bottom of the slide and then climbs up steep, dusty switchbacks to the continuation of the main trail at 3.8 miles.

A good path now descends steadily east through meadows to Chalbermatten (6,906-ft.), the site of an old restaurant, at 4.2 miles. The Findel Glacier, Riffelalp and Gornergrat dominate the view to the east.

Beyond Chalbermatten the trail continues it moderate descent, passing above the Zmutt reservoir and then traveling through pastures to Zmutt at 5.6 miles. The small village is a popular lunch spot and a favorite destination for tourist seeking a short walk from Zermatt. (See the Zmutt Loop hike for more information)

The rest of the hike is on a popular trail that descends along a wide, pleasant track, passing some old buildings and grain storehouses. At 6.0 miles the trail drops steeply down a few switchbacks and then curves left (northeast) as it heads back to Zermatt.

Reach the south end of Zermatt at 7.3 miles. From here you can either hop on an electric shuttle bus (fee required) or walk 0.8 miles back through town to the start of the hike for a total distance of 8.1 mile. (When in doubt, follow signs pointing to the Zermatt Bahnhof.)

Walking Directions from the Zermatt Bahnhof (Train Station) to the Schwarzsee Lift Station: Walk south/southwest on Bahnhofstrasse, the town’s main street, for 0.3 miles and then turn left onto Kirchstrasse (Church Street). You will pass the Matterhorn Museum on the left just before the turn. The Pfarrkirche St. Mauritius (church) is located on the southeast corner of Bahnhofstrasse and Kirchstrasse.)

Walk down Kirchstrasse for 0.1 miles, crossing the bridge over the river, and then turn right on Schluhmattstrasse (Schluhmatt Street), the first street past the river. Follow Schluhmattstrasse for 0.4 miles to the Matterhorn Glacier Paradise / Schwarzsee Gondola Station. Purchase a one-way ticket to Schwarzsee. For more information see Schwarzsee Information on the Matterhorn Paradise lift pages.

Hiking to Schwarzsee: Walking from the lift station to Schwarzsee adds 4.0- to 5.0-miles (depending on the route) and over 3,100-ft. in elevation gain to the hike. To walk from the bottom of the Schwarzsee lift station, follow the yellow trail signs for Blatten, Zum See, Furi and Schwarzsee. The trail ascends through trees and meadows to Schwarzsee on the Matterhorn plateau. The section of the trail from Zermatt to Furi walks under or near the gondola. Beyond Furi, a mid-station for the gondola, the route enjoys some nice views of the Gorner Glacier Garden area.