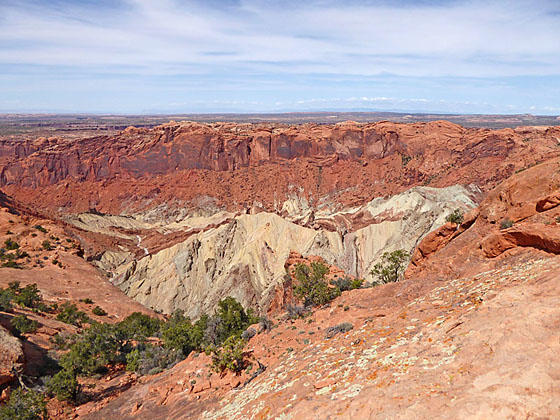 A short hike leads to a fascinating viewpoint overlooking a geologic anomaly in canyon country where rock layers are dramatically deformed into a dome surrounded by a giant anticline, which looks like a crater measuring nearly 3-miles across.

I highly recommend the short hike to the Upheaval Dome Overlook, featuring fantastic views of a geological anomaly. Here rock layers are dramatically deformed into a “bulls-eye” pattern nearly 3-miles across. In the center, the rocks are pushed up into a circular structure called a dome, or an anticline. Surrounding this dome is a downwarp in the rock layers called a syncline.

Geologists believe Upheaval Dome is either a salt dome or an impact crater. (See the end of this hiking description for more information on these competing theories.) Whatever the origin of Upheaval Dome, it is the result of erosion of a structural dome. Rock layers now at the surface within the dome were once buried at least a mile underground and are not visible anywhere else in the nearby area. While some call this feature a crater, it is not a crater in the traditional sense of the word, but simply another example of the erosion which created Canyonlands National Park

The 0.6 miles round trip hike to the first overlook, with dramatic views of the massive “crater” and dome, gains 120-ft. as it ascends through desert scrub and slickrock to the viewpoint. From the park area the trail travels about 300-ft. before reaching an intersection. Here the Syncline Loop trail heads left and right. We continue straight ahead, ascending on easy grades on a well-defined trail to the overlook. Interpretive signs at the overlook explain the two main theories about the creation of this striking geologic feature.

From the first viewpoint an undulating trail heads northwest around the rim on easy grades, crossing slickrock benches marked with rock cairns. The second overlook offers more great views from a slightly different perspective. The round trip hiking distance from the trailhead to the first and second overlook is 1.7 miles with an elevation loss of 200-ft.

Geologists do not know what caused Upheaval Dome but there are two main theories.

A thick layer of salt, formed by the evaporation of ancient landlocked seas, underlies much of southeastern Utah and Canyonlands National Park. When under pressure from thousands of feet of overlying rock, the salt can flow plastically, like ice moving at the bottom of a glacier. In addition, salt is less dense than sandstone. As a result, over millions of years salt can flow up through rock layers as a "salt bubble", rising to the surface and creating salt domes that deform the surrounding rock.

When geologists first suggested that Upheaval Dome was the result of a salt dome, they believed the land form resulted from erosion of the rock layers above the dome itself. Recent research suggests that a salt bubble as well as the overlying rock have been entirely removed by erosion and the present surface of Upheaval Dome is the pinched off stem below the missing bubble. If true, Upheaval Dome would earn the distinction of being the most deeply eroded salt structure on earth.

When meteorites collide with the earth, they leave impact craters like the well-known one in Arizona. Some geologists estimate that roughly 60 million years ago, a meteorite with a diameter of approximately one-third of a mile hit at what is now the Upheaval Dome. The impact created a large explosion, sending dust and debris high into the atmosphere. The impact initially created an unstable crater that partially collapsed. As the area around Upheaval Dome reached equilibrium the rocks underground heaved upward to fill the void left by the impact. Erosion since the impact has washed away any meteorite debris and now provides a glimpse into the interior of the impact crater, exposing rock layers once buried thousands of feet underground.

From Moab: Head north on US 191 N (Main Street) for 11 miles and turn left (west) onto UT 313 W. Follow UT-313 W for 14.6 miles to the “Y” intersection where UT-313 turns left. Continue straight ahead on the Grand View Point Rd / Island in the Sky Road for 13.1 miles and then turn right on the Upheaval Dome Road. Drive for 4.8 miles on Upheaval Dome Road to the end of the road and the parking area for the Upheaval Dome / Syncline Loop trailhead. The trail starts at the northwest end of the parking lot.