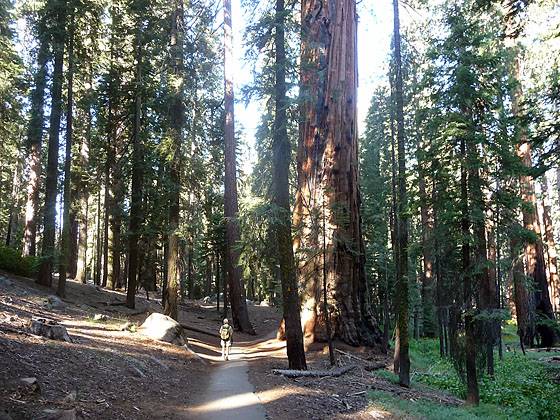 This great loop hike through the heart of the aptly named Giant Forest visits some of the world’s largest trees and traverses amazing groves of these stately giants. 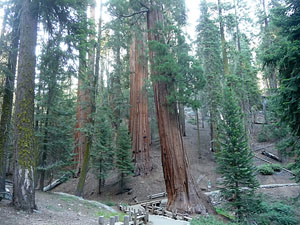 The large network of interconnecting trails in Giant Forest allows hikers to design a wide variety of loops tailored to desired hiking distance and available time. The loop described below is a favorite of mine.

Before setting out on the trail I strongly recommend purchasing the Giant Forest Map available at the Lodgepole Visitor Center. The map will help you select options and keep your party on track.

From the south end of the General Sherman Tree parking area, pass under the wooden arch and descend southwest on a paved trail, which includes a series of stairs, for 0.4 miles to a junction with the spur trail to the General Sherman Tree. About three-quarters of the way down the trail is the Sherman Tree Overlook, a viewing platform with great unobstructed views of this majestic tree. An imprint of the tree’s circumference on the floor of the platform helps illustrate the size of this giant.

Within the vicinity of the tree are a number of impressive sequoias that demand your attention. After admiring this massive tree and its neighbors, return to the junction with the Congress trail.

Follow the wide paved Congress trail as it ascends gently to the northeast and then swings south, descending on easy grades beneath towering sequoias scattered amid the pine forest. Beyond the hubbub of the Sherman Tree the Congress Trail is a nice change of pace. The tranquil setting and open forest invite frequent stops to marvel at these towering giants.

About a mile from the trailhead reach a junction. To the right is a short spur trail that enables hikers to shortcut the trail and head back to the Sherman Tree. Continue straight ahead. Soon the trail turns southeast and makes a short moderately steep ascent up the hillside, passing a series of striking sequoias along the way. Reach the junction with the Alta Trail at 1.3 miles.

Turn right at the junction and continue on the Congress trail, which for a short distance is coincident with the Alta Trail. There are a number of huge fire scarred sequoias near the junction and along this section of the path.

At 1.4 miles the Congress Trail turns left toward the President Tree while the faint Alta Trail continues straight ahead. Turn left and reach the President Tree at 1.5 miles. The tree, considered to be the third largest tree in the world as measured by the volume of its trunk, is believed to be over 3,200 years old. Just beyond the tree the trail curves south and passes a junction with a short spur trail leading to the Trail of the Sequoias, the return leg of this long loop.

Just ahead is the Senate Group, an interesting cluster of sequoias. In the middle of the cluster is a junction with the other end of the Trail of the Sequoias, which heads south. Ignore this trail and instead continue along the Congress Trail as it curves to the northwest and passes the House Group, another tight grouping of sequoias. A short distance beyond this cluster is the huge General Lee Tree. Ahead is the McKinley Tree, easily identified by the large burl midway up its trunk.

Near the Mc Kinley tree the trail arrives at a five way junction with the Congress, Circle Meadow and Alta trails at 1.8 miles. Turn left (south) on the Circle Meadow Trail toward Cattle Cabin. This is the least distinct of the trails. The continuation of the Congress Trail turns right (north), back to the Sherman Tree and the parking area of a 3.0 miles loop, while the Alta Trail heads southwest toward the Giant Forest Museum. A map at the intersection will help you get oriented. 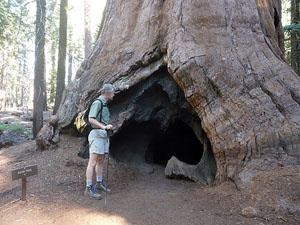 To continue on the Giant Forest Loop, follow the Circle Meadow trail as it descends on gentle grades through some fine stands of sequoias. Notable trees along this section of the trail include the Room Tree, where a hole in the base of the trunk leads to a large room hollowed by repeated fires, a sequoia with a massive burl at its base and the founders group, a cluster of sequoias dedicated to the citizens who worked to create the park.

At 2.0 miles the grade abates as the trail reaches Cattle Cabin. The one-room log cabin, built in 1980 supported Hale Tharp’s cattle operations in the area. The cabin and surrounding land were purchased by the park service in 1916.

Continue wandering through the mixed forest scattered with giant sequoias. Wildflowers, ferns and grasses grow in the understory. At 2.3 miles the trail reaches a view point along the western fringe of Circle Meadow. Giant sequoias grow amid the forest ringing the narrow horseshoe shaped meadow.

In a short distance the trail passes between two massive sequoias, dubbed the Pillars of Hercules, and then through the fire scarred trunk of the Black Arch. Soon the trail crosses a small sliver of Circle Meadow and climbs a low rise to a trail junction, at 2.7 miles. Turn left and follow the trail in the direction of Crescent Meadow. The trail to the right leads to the Washington Tree and Giant Forest Museum.

Through the trees you can see the emerald green expanse of Crescent Meadow, called the “Gem of the Sierras,” by John Muir. Be sure to take a short detour through the trees to get a better view of the meadow.

As Muir came upon Crescent Meadow he wrote the follow, “It seemed impossible that any other forest picture in the world could rival it. There lay the grassy, flowery lawn, three fourths of a mile long, smoothly outspread, basking in mellow autumn light, colored brown and yellow and purple, streaked with lines of green along the streams, and ruffled here and there with patches of ledum and scarlet vaccinium. Around the margin there is first a fringe of azalea and willow bushes, colored orange yellow, enlivened with vivid dashes of red cornel, as if painted.”

The trail now follows an undulating course through the forest to the north of the meadow, crossing a small rise and then climbing to a junction with the trail looping Crescent Meadow. Continue straight ahead to a second junction where a short spur trail leads to the Chimney Tree, a huge dead sequoia with a fire hollowed core.

After visiting the Chimney Tree return to the main trail and follow the path as it heads east in the direction of Tharp’s Log. The trail now crosses a small rise separating Crescent and Long Meadows and arrives at Long Meadow and Tharp’s Log at 3.7 miles.

Hale Tharp first visited the area in 1858. By 1861 he has built a rustic home in the fallen sequoia and lived there every summer until the park was established in 1890. He used the nearby meadows to graze his cattle.

After admiring Tharp’s innovative home, continue along the trail as it arcs around the north end of Long Meadow and arrives at a trail junction at 3.9 miles. Here a trail turns right (south) along the east side of Long Meadow. Our trail continues ahead, ascending steeply for 0.2 miles to a junction with the Trail of the Sequoia at 4.1 miles.

Turn left (north) on the Trail of the Sequoias. The trail follows an ascending traverse on easy to moderate grades along the hillside through a mixed forest scattered with sequoias of varying ages and sizes. You will feel like you are in the wilderness on this part of the trail and probably run into few if any hikers.

Pass through the trunk of a fallen sequoia at 5.0 miles and in a short distance cross the Crescent Creek drainage. Beyond the crossing the trail turns southwest ascending on moderate grades along the west side of the drainage. In less than half a mile the trail curves to the northwest and climbs to and crosses the top of a ridge at 5.6 miles. As you climb, partially obstructed views open to the south.

Descend from the ridge on moderate grades through a mixed forest with numerous giant sequoias. Occasional switchbacks ease the decent. At 6.3 miles pass the Chief Sequoyah Tree and arrive at a trail junction. Turn left and follow the trail to the President Tree and a junction with the Congress Trail at 6.4 miles. Turn right and follow the Congress Trail to the intersection with the Alta Trail.

At the junction climb the Sherman Tree Trail back to the parking area. The total distance for the loop is 7.6 miles. 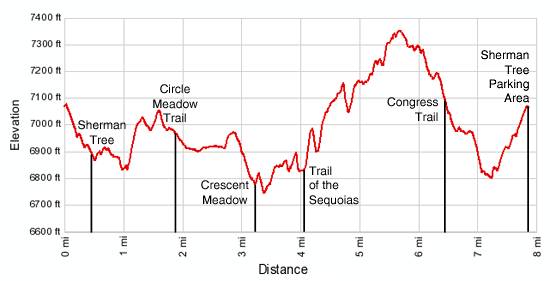 Other Hiking Regions in:
California