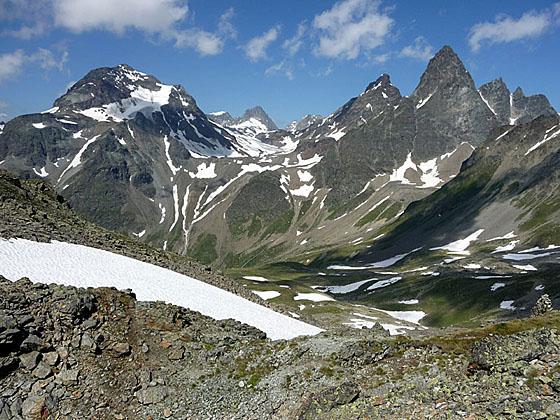 This long, demanding hike visits three scenic valleys and crosses a panoramic pass with splendid views of the high peaks of the Silveretta and Engadine Dolomite Alps. 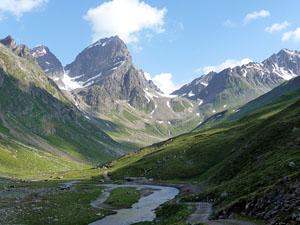 Distance from Trailhead: 9.0 miles (round trip)

The day starts with a train and bus ride to the village of Guarda. (See trailhead directions below.) The well preserved village is filled with beautiful, traditional Engadine houses adorn with sgraffiti, a technique where the top layer of plaster is scratched or incised with a design, revealing a lower layer of plaster in a contrasting color.

From the bus stop in the village, walk a short distance (about 700-ft.) east/northeast along the main street to a fountain in front of a house. Look for a sign on the east side of the house pointing left (north) toward Alp Sura and Chamanna Tuoi (Tuoi Hut). Turn left and follow the paved lane between houses. The road surface turns to gravel as the track ascends northwest on easy to moderate grades through pastures toward Val Tuoi (Tuoi Valley). As you head uphill enjoy views of the Engadine Dolomite range rising above the Lower Engadine Valley to the south and the summits towering above Susch to the west.

At 0.7 miles the trail curves to the right (north) into the Tuoi valley, ascending at a steady pace through flower-filled meadows and cluster of larch and pine trees along the east side of the valley. Ignore any trails branching right or left. Instead keep to the gravel road, following the signs to the Tuoi Hut.

At 1.3 miles the grade eases as the trail skirts a forested hillside. Soon the trees give way to meadows and views opens to the cirque at the head of the valley, dominated by Piz Buin. The buildings of Alp Suot are seen along the valley floor in the distance.

The track splits at 2.5 miles, shortly before reaching Alp Suot. Take the dirt/gravel road branching right toward the Tuoi Hut, Alp Sura and Lai Blau, which climbs on moderately-steep grades up a hill. The road straight ahead goes to Alp Suot.

Part way up the hill the trail passes Via Braja (6,742-ft.) where a trail branches right toward Alp Sura and Ardez. We continue along the main trail climbing toward Lai Blau and the Tuoi Hut. As you ascend the hill, turn around for great views of the peaks rising above the Lower Engadine Valley to the south.

Reach a "Y" intersection at 3.0 miles. The trail to the right heads to Lai Blau. We bear left toward the Tuoi Hut on a wide track that descends to and then gently climbs along the right (east) side of the stream.

The trail veers away from the stream as it nears a small wood building and then ascends on moderate grades toward the head of the valley. Across the valley, to the west, a pretty waterfall tumbles down the craggy slopes.

Reach Chamanna Tuoi (7,382-ft.) at 4.5 miles. The stone structure, offering dormitory accommodations and meals, enjoys great views of nearby peaks. Piz Buin, Piz Jeramias and the Dreilanderspitz, along the Swiss-Austrian border, tower above the head of the valley while Piz Fliana dominates the view to the west. 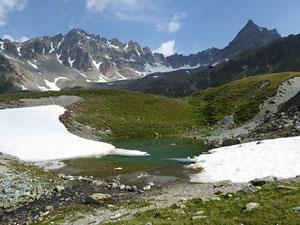 Distance from Trailhead: 11.4 miles (round trip)

To continue the hike to Furcletta Pass and Ardez, go around the left (west) side of the hut and follow the trail as it curves to the right (east/northeast) and climbs very steeply through rocky meadows toward Furcletta Pass and Urezzas, staying to the right (south) of a stream. Along the way pass a trail branching right toward Lai Blau. As you ascend, enjoy ever expanding views of the peaks to the north and west. Soon great views open to the Tuoi Glacier, cradled in a bowl beneath the cirque formed by the Dreilanderspitz, Hinter Jamspitz and Piz Tuoi.

At 5.1 miles the path begins a steep ascent along a rocky gully, staying to the left (north) of a small stream. Soon the trail crosses the stream, climbs out of the gully and skirts the right (east) side of a small tarn. Before reaching the end of the tarn the trail curves to the right (northeast) and climbs another rocky gully. Red and white blazed rocks help keep you on track.

The final ascent to the pass climbs very steeply up a boulder field, marked by red and white blazed rocks and stakes. Sections of the route are often covered in snow. If this is the case, located the sign at the top of the pass and pick a route through the snow, following the footsteps of others uphill. As you ascend, enjoy splendid views of the peaks rising along the north and west sides of the valley.

Reach Furcletta Pass (8,973-ft.) at 5.7 miles. The pass, a saddle on the ridge between Piz Furcletta and Piz da las Cavigliadas, enjoys magnificent views west to Piz Fliana, Piz Buin and beyond to the Verstanclahorn. To the east views extend down the Val d’Urezzas to Piz Minschun towering about the east side of Val Tasna. Piz Chaschlogna dominates the view along the north side of the Urezzas valley.

From the pass you can either return to Guarda for an 11.4 mile round trip hike or continue the hike over Furcletta pass to Ardez for a 13.5 mile point-to-point hike. I recommend heading toward Ardez (3-hr 14-min) via the scenic Urezzas and Tasna Valleys. 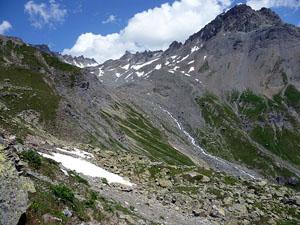 Distance from Trailhead: 13.5 miles (one way)

To walk to Ardez, follow the trail as it drops steeply down the east side of the pass through scree, boulders and, at times, snow fields. Use caution if the route is covered in snow and turn around if you don’t feel comfortable descending the slick slopes.

Cross the stream draining snowmelt from the pass at 6.2 miles and 6.3 miles and then a small side stream. Beyond the crossings the trail drops down very steep switchbacks. As you descend, rocky slopes give way to flower-speckled meadows and views open to a beautiful cirque towering above the north side of the trail.

At 7.1 miles the grade abates as the trail crosses a braided stream carrying meltwater from the Urezzas Glacier, nestled in the cirque on the north side of the valley. Depending on the time of year, crossing the streams may involve simple rock hopping or getting your feet wet. In places, wooden planks help to keep your feet dry.

Across the stream are the remains of old stone alp buildings at Marangun d’Urezzas. Past the alp the path keeps to the north (left side) of the Urezzas stream.

Reach the alp buildings at Urezzas (6,926-ft.) and a trail junction at 8.0 miles. Bear right (east/southeast) on the trail heading toward Alp Valmala (25-min) and Ardez (2-hr 15-min). The trail to the left (northeast) leads to the Jamtal Hut and Pass Futschol.

The trail to Alp Valmala crosses a bridge to the south side of the Urezzas stream and then travels through pastures, curving to the right (south) as it enters the Val Tasna (Tasna Valley). Ignore the trail crossing a bridge to a dirt road on the the east side of the Tasnan River. Instead continue heading south down the west side of Val Tasna beside the rushing waters of the Tasnan River.

Reach Alp Valmala (6,493-ft.) and a trail junction at 8.9 miles. The trail to the left crosses the Tasnan River and then heads toward Alp Laret and Ftan. We continue straight ahead toward Ardez (1-hr 45-min) on a trail skirting the right (west) side of the alp buildings. Beyond the alp the trail descends on easy grades, passing through pastures with nice views of the peaks rising above the Lower Engadine Valley to the south. Behind you are nice views up Val Tasna.

At 9.9 miles a junction offers two options for returning to Ardez, a high route and a low route. Both are the same length. The high route or Via Engiadina trail, branching right toward Ardez and Munt, is the more scenic option but involves some ups and downs as it crosses minor drainages high above the west side of the valley. The low route, branching left, drops down to and then travels along the west side of the river before turning southwest toward Ardez.

I prefer the high route which travels through lovely wildflower-filled pastures with expansive views to the south. Beyond the meadows the trail passes though clusters of larch and pine trees as it dips in and out of minor drainages. At 11.7 miles the path reaches a large meadow at the foot of the valley with spectacular views of the Engadine Dolomite peaks towering above the Lower Engadine valley.

Beyond the meadow the trail drops down to meet a broad track above Ardez. Turn left (east) and follow a broad path for 0.3 miles to a junction where the signs point right (south) to a track descending steeply to Ardez. The train station is located on the south side of the village near the highway at 13.5 miles. Signs along the way will keep you on track.

Note: This is a very long and strenuous hike, gaining over 3,500-ft. on the climb to the pass and then dropping over 4,200-ft. to Ardez. Get an early start and allocate 7-8 hours to complete the walk, depending on you pace and the number of stops along the way.

An out-and-back hike to the Tuoi Huts offers hikers a shorter and less strenuous day while still enjoying the scenic delights of the Tuoi Valley. 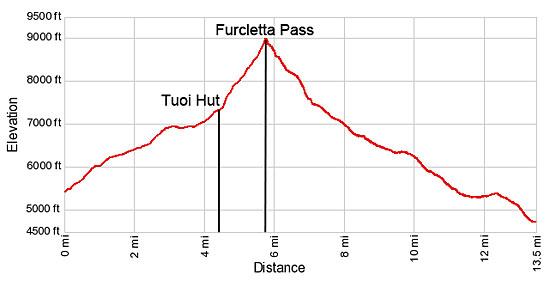 From Scuol to Guarda: Take the train from Scuol in the direction of Pontresina or Landquart and get off at Guarda staziun (station). The ride takes about 12 minutes. Note: Guarda is a “stop on demand” station. Listen for the conductor to announce the stop. He/she will tell you it is a stop on demand. You must then push the “Stop on Demand” button, typically located near the door, to signal to the conductor that you wish to get off the train in Guarda.

Guarda sits atop a bench high above the north side of the Lower Engadine Valley. At the Guarda staziun change to the minibus that climbs to the village (cumun) in 8 minutes. Depending on the time of day, you will either need to wait for 5 minutes or 18 minutes to catch the bus.