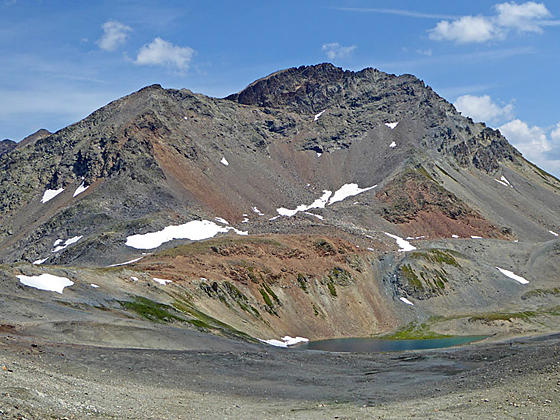 Get off the beaten path with this scenic hike climbing to Fuorcla Pischa, a high pass at the head of Val Languard. The hike enjoys great views of the glacier clad Bernina massif, Piz Languard and the stark basin, sprinkled with tarns, below Pischa Pass. 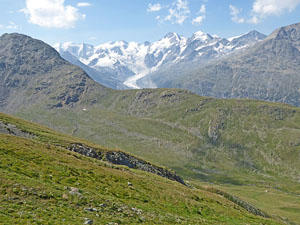 In Pontresina, ride the Languard chairlift to Alp Languard. (See trailhead directions below.) Outside the lift station find the trail signpost and start waking east toward Piz Languard and Fuorcla Pischa.

The trail angles up the northeast side of Val Languard on the southwest facing slopes between Piz Muragl and Piz Languard, accompanied by fine views of Piz Cambrena, Palu and Bernina in the distance to the south. At 0.2 miles the trail splits with the path to the right (southeast) heading toward Chamanna Paradis (Paradis Hut) and Lej Languard (Lake Languard). We bear left toward Piz Languard and Fuorcla Pischa.

The path now ascends steep switchbacks beneath the south facing slopes of Piz Languard, passing a third trail to Lej Languard at 1.6 miles. Another series of steep switchbacks lead to the high point (9,600-ft.) of the hike and a junction at 1.8 miles with a trail branching left to the summit of Piz Languard. (See the Piz Languard hike for more information.) We bear right toward Fuorcla Pischa and Bernina Suot.

At 2.5 miles pass the last trail descending to Lej Languard and Chamanna Paradis before the pass. For those walking to the pass and back this trail offers an alternative return to the Alp Languard chairlift.

The trail now ascends on easy grades through a rocky moonscape toward the pass. Turn around as you climb for incredible views of Piz Languard, Crasta Languard and the peaks of the Upper Engadine Valley towering above St. Moritz.

The path descends the east side of Fuorcla Pischa and soon reaches a junction. We bear right toward Bernina Suot. The trail to the left leads to Lake Pischa and the route to Fuorcla Tschuffer.

Beyond the intersection the trail descends on moderate to moderately steep grades for 0.3 miles and then traverses along a bench through a starkly beautiful landscape of rock outcroppings, boulder fields and small tarns. Look down to see small flower growing amid the rocks beside the trail.

At 3.7 miles the bench abruptly ends and views open to the Val da Fain, a deep, emerald green valley rimmed by granite peaks. The trail now descends steeply beneath the east facing slopes of Piz Albris. Ahead are lovely views of Piz Cambrena, Piz Palu, Piz Zupo, and Piz Bernina soaring above the Diavolezza area. Lago Bianco, a large reservoir at Bernina Pass, dominates the view to the southeast. Behind you a waterfall on the outlet stream for Lake Pischa cascades down steep cliffs into the Val da Fain.

At 4.2 miles the trail turns left (northeast) at a sharp hairpin curve. A short distance beyond the path turns right (southeast), descending a series of tight, steep switchbacks down grassy slopes to the west of Lake Pischa’s outlet stream. The switchbacks end at 5.1 miles and the grade abates as the path curves to the right (south). The trail now descends to a wide track along the valley floor at 5.4 miles. Here we turn right (down valley) toward Bernina Suot. (Note: bikes are allowed on this trail.)

The track now descends on easy to moderate grades down the Val da Fain above the west side of the Fain River. At 6.1 miles pass a trail branching left to Alp Bernina. At 6.4 miles the track exits the mouth of the valley and crosses a bridge over the Bernina River. On the south side of the bridge turn left at the junction. Soon the trail reaches the highway. Carefully cross the highway and enter the car park for the Diavolezza cable car, train station and bus stop. Reach the trail station/bus stop at 6.7 miles. It is also possible to turn right after crossing the highway and follow a trail to the Bernina Suot train station. Diavolezza is closer.

There are several options to get to the Languard chairlift at the start of the hike and back to St. Moritz from Bernina Diavolezza. Check the current schedules to determine which options will be faster.  Schedules are posted at the train stations/bus stops and on the SBB website/SBB app.

From St. Moritz to Alp Languard: At the St. Moritz Bahnhof, board a #1 bus in the direction of the Samedan Bahnhof. Get off at the Punt Muragl Talstation and change to a #2 bus bound for Pontresina Bahnhof. Ride the #2 bus to the Pontresina Rondo stop. Get bus information from the local tourist office, the Engadine Bus Routes& website or the SBB website/SBB app to find the closest stop to your accommodations.

From the Pontresina Rondo, walk southeast on Via Maistra, the main street in Pontresina, for one block to Via da Scoula. Here you will see a street branching left off Via Maistra called Via Cruscheda. Walk up Cruscheda and then turn left to reach the bottom station for the Sesselbahn Languard (Languard Chairlift) to Alp Languard. Signs will mark the turn to the chairlift. The bus ride and the walk should take 20-25 minutes depending on connections.

You can also take the train from St. Moritz bound for Tirano and get off at Pontresina Bahnhof. Exit the train station and turn right, walking along the road which turns into Via da la Staziun. The road soon crosses a river. Beyond the crossing turn right at the “Y” intersection and ascend to cross the highway and then the River Flax. Continue up the road a short distance and cross Via Da Mulin. Just beyond turn right on a walkway (La Senda) that climbs to Via Maistra, the main street in Pontresina. Turn left (northeast) and walk up Via Maistra. Soon you will pass the Hotel Schweizerhof, a peach colored building on the right. At the north end of the hotel turn right (east/northeast) and climb the steps. At the top of the stairs, cross the street and continue heading east/northeast on the side street, past the car park to the bottom station of the Languard chairlift. Trains schedules are available at the SBB website/SBB app.

From Bernina Diavolezza to St. Moritz: The best options are to take the train directly to St. Moritz or catch the #705 bus to St. Moritz Bahnhof. Another option is to get on the #701 bus bound for the Pontresina Bahnhof and get off at Pontresina Post. Wait at the stop for the next bus heading toward Surlej/Corvatschbahn and get off at the St. Moritz train station or another stop convenient to your accommodations. Check the SBB website/SBB app for current schedules and see which option is fastest.