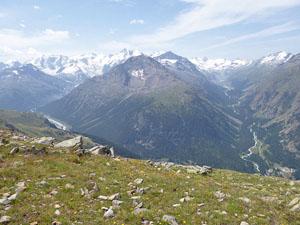 The Muottas Muragl to Alp Languard hike starts above the north side of Val Bernina near its confluence with the Upper Engadine. From Punt Muragl ride the funicular to the top station at Muottas Muragl. Here splendid views encompass Piz Julier and Piz Ot, towering above the Upper Engadine Valley to the west. The high peaks of the Bernina Alps above Val Roseg and Morteratsch valley fill the skyline to the south while Piz Vadret and Piz Muragl rise above the Muragl valley to the east.

A brief ascent along the ridge leads to the Segantini Hut and more great views. From the hut the trail descends briefly before beginning a traverse beneath the rugged peaks and ridges lining the north side of the Bernina Valley. At 3.0 miles the path reaches the first of two junctions where a trail drops steeply to Alp Languard. The “short” version of the hike (4.0 miles) turns right at the first junction and descends to Alp Languard along the themed Climate Trail, which includes eighteen information panels explaining how climate change is impacting the alpine environment.

Alternatively, extend the hike by continuing straight ahead toward Piz Languard. The trail now curves around the west facing flanks of Mount da Barba Peider and then, after a short ascent, traverses beneath the ridge anchored by Piz Muragl and Piz Languard. This section of the trail travels through boulder fields and rocky meadows, climbs around a few obstacles and boasts spectacular views of the Roseg and Morteratsch valleys, the Bernina massif and nearby summits. At a junction below Piz Languard a second trail drops down the chairlift at Alp Languard for a 6.0 miles hike.

This trail should not present any problems for most hikers up to the Segantini Hut. Beyond the hut short sections of the trail, especially on the longer options, are narrow and exposed. Fix chains bolted to the rock offer a level of security along these segments. There are also a few places where you may need to use your hands to negotiate short, steep descents. Both trails dropping down to Alp Languard are quite steep.

Pick a beautiful day for this hike so you can take your time and soak in the views. Get an early start to avoid the clouds that typically move in as the day progresses and obscure the views. 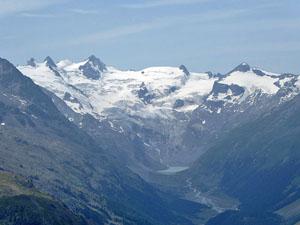 Distance from Trailhead: 4.0 miles (one way)

Take the Muottas Muragl Funicular from the Punt Muragl Talstation (bottom station) to Muottas Muragl (8,051-ft.) (see directions to the trailhead below). Overlooks near the exit to the funicular station offer stunning views of the Albula Alps to the west/southwest, dominated by Piz Julier and Piz Ot, towering above the Upper Engadine Valley. St. Moritz, Celerina and Samedan lie nestled along the valley floor.

To the south views extend up Val Roseg to the high peaks of the Bernina Alps, including Piz Bernina, Piz Scerscen, Piz Gluschaint and Piz Roseg, to name a few. To the east, Piz Vadret and Piz Muragl fill the skyline above the Val Muragl (Muragl Valley).

When you are done enjoying the views, find the trail signpost behind the funicular station and head east/southeast toward Chana Segantini (Segantini Hut) and Alp Languard. The trail descends on moderate grades through pastures, passing Alp Muottas along the way. At 0.9 miles the grade abates as the path reaches the floor of Val Muragl and passes a small building. Ignore the trail to the right that drops to Punt Muragl and Samedan.

On the other side of the bridge ignore the trail branching right (west) and descending to Unterer Schaftberg, Alp Languard and Puntraschinga (a Romansh derivation of Pontresina). Our trail toward Chana Segantini and Alp Languard now climbs a series of steep switchbacks up to the ridge extending northwest from Munt da la Bes-cha. At 1.6 miles the switchbacks end and the trail curves to right, continuing its steep climb toward the ridge crest.

As you ascend enjoy ever improving views of Piz Ott and the peaks lining the head of the Val Saluver to the west of Celerina. To the north, Piz Kesch, Piz Cotschen and nearby peaks form the backdrop for Muottas Muragl at the western end of the ridge extending from Piz Vadret.

Soon the trail curves to the left (southwest) and climbs to the ridge crest at Munt de la Bes-cha (8,683-ft.) at 1.9 miles. Here glorious views extend west/southwest to Piz Ot, Piz Julier and the high peaks of the Albula range. Celerina and Samedan lie on either side of the flood plain marking the confluence of Val Bernia with the Upper Engadine valley. The Upper Engadine lakes extend southwest along the valley floor, with St. Moritz surrounding the west/southwest shores of Lake St. Moritz.

To south are wonderful views of Piz Roseg, Piz Scerscen, Piz Sella and Piz Gluschaint rising above the head of the Val Roseg. Piz Bernina, Piz Zupo and Piz Palu soar above the Morteratsch Valley to the east of Val Roseg.

The trail now climbs steeply up the broad ridge crest to the Segantini Hut (8,960-ft.) at 2.1 miles. The hut, now a restaurant, is named after a famous artist that painted and died here in 1899. From the hut and the area around the hut enjoy breathtaking views of the Bernina massif, Val Roseg, the Upper Engadine Valley and the Albula Alps. Beyond the hut the trail travels along easy grades along the ridge, passing some nice places to sit and take in the views.

Hikers not comfortable with narrow, exposed trails should turn around here and return to Muottas Muragl for a 4.2 miles hike. Otherwise, pass a junction at 2.25 miles with a trail branching left and climbing to the summit of Las Sours. Our trail branches to the right, dropping steeply through meadows along the southwest face of the ridge.

Reach a trail junction at 2.5 miles. The trail to the right drops down very steep switchbacks to Unter Schafberg and Pontresina. We take the trail straight ahead toward the Bergstation Languard and Piz Languard. You are now on the Climate Trail, which features eighteen information panels explaining how climate change is impacting the alpine environment.

Follow the trail as it traverses southeast along the extremely steep flanks of Las Sours, passing through an area of rock walls used as avalanche barriers. Fixed chains provide a level of security along narrow, exposed section of the path. Along the way enjoy stunning, non-stop views of the Bernina massif, Piz Zupo and Piz Palu and the Morteratsch glacier.

Reach a “Y” intersection at 3.0 miles. Here a decision needs to be made. The short version of the hike takes the trail branching right toward the Bergstation Languard and Puntraschinga. This path descends steeply on a diagonal along the slopes beneath Piz Muragl to a junction at 3.9 miles. Turn right at the junction on the trail to the Bergstation Languard, which is now in sight, and Pontresina. Reach the chairlift at Alp Languard (7,631-ft.) at 4.0 miles. A six minute chairlift ride whisks hikers down to Pontresina. Alternatively, a trail drops steeply down the hillside to Pontresina, losing over 1,600-ft. in 1.8 miles.

Long Version of the Hike to Alp Languard 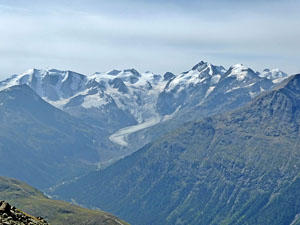 Distance from Trailhead: 6.0 miles (one way)

To extend the day, at the Y junction at 3.0 miles, continue on the longer walk to the second junction for Alp Languard by taking the trail branching left toward Piz Languard. This rocky, undulating trail curves around Muot da Barba Peider, a minor peak on the ridge extending southeast from Piz Muragl and passes below/above more avalanche barriers. Along the way great views open to Lake Languard, nestled in meadows beneath Piz Albris near the head of the Languard Valley.

At 3.25 miles the trail ascends on moderate to moderately-steep grades up talus slopes. The grade abates as 3.6 miles and the path now traverses through talus and rocky meadows beneath the ridge anchored by Piz Muragl and Piz Languard. Views extend up the Morteratsch Valley to the Morteratsch Glacier flowing down from the cirque defined by Piz Bernina, Piz Argient, Piz Zupo and the Bellavista ridge. Piz Palu towers above the Pers Glacier.

At 4.0 miles the rocky slopes give way to meadows and the hiking gets easier. Piz Languard now dominates the view above the trail. Great views extend up the length of the Languard valley to Fuorcla Pischa, the pass at the head of the valley.

Turn right (west) at the junction and descend steeply toward Alp Languard and the Languard chairlift. Pass a junction with a trail branching southeast toward Lake Languard and Chamana Paradis (Paradis Hut) at 5.1 miles.

Reach Alp Languard (7,631-ft.) and the Languard chairlift at 6.0 miles. Here you will also find trails dropping down to Pontresina (spelled Puntraschigna). The knee crunching hike to town loses over 1,600-ft. in 1.8 miles. My advice is the save your knees and take the chairlift, which carries you down to the village in just 6 minutes.

From St. Moritz: From the St. Moritz Bahnhoff, take the #1 bus toward Samedan, which stops at Punt Muragl (the bottom station of the Muottas Muragl Funicular), located in Val Bernina to the northwest of Pontresina. There are other bus routes that stop at Punt Muragl leaving from St. Moritz, St. Moritz Bad and Pontresina. Get bus information from the local tourist office, visit the SBB Website or download the app to find the best option near your accommodations.

From Alp Languard to St. Moritz: Take the chairlift from Alp Languard to the bottom station in Pontresina. Exit the chair lift and walk down the street. Take a right (northwest) on Via Cruscheda. Follow Crusheda down to Via Maistra, the main street in Pontresina. Continue straight ahead on Maistra (northwest) to the Pontresina Rondo bus stop. Catch the #1 bus in the direction of Surlej, Corvatschbahn and get off at the stop in St. Moritz closest to your accommodations. The ride takes 45 minutes. Get bus information from the local tourist office, visit the SBB Website or download the app to find the best option near your accommodations.

Other options require a bus change or a long walk. For example, you can walk to the Pontresina, Punt Ota Sur bus stop. (To find the Punt Ota Sur stop, continue along Via Miastra and turn left on Via Da la Staziun. Follow this street for a short distance to the Punta Ota Sur bus stop.) At this stop, get on a #2 bus bounds for Silvaplana post. Change to the #1 bus (headed to the St. Moritz Bahnhoff) at the Punt Muragl Tal (valley) Station.

You can also follow Via Da la Staziun as it drops down the hill, crosses the River Flax on a bridge and then curves around to the Pontresina train station. At the train station get on a train headed for St. Moritz. The walk to the train station will take about 20 minutes.