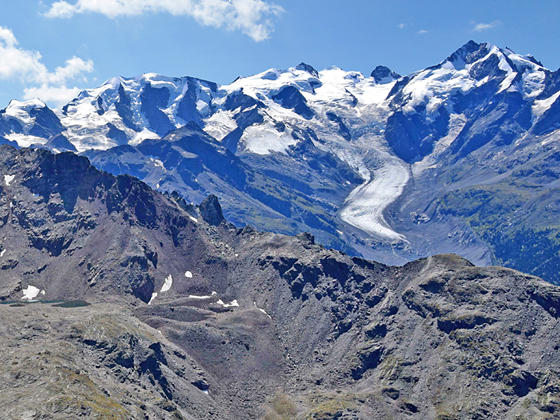 Breathtaking views of the summits towering above the Upper Engadine and Bernina Valleys reward hikers completing the very steep climb to the summit of Piz Languard. This summit is one of the easier 3000-meter peaks to scale, with a good, albeit rugged, trail going to the top.

The trail to the summit of Piz Languard is popular, and deservedly so, with stunning vistas in all directions. Undoubtedly, the star of the show is the Bernina massif and its shimmering glaciers across the valley to the south. To the west views extend to the summits towering above the Upper Engadine Valley while the peaks rising above the Upper Bernina Valley and the Italian border fill the skyline to the east/southeast. On a clear day distant views stretch southwest to Monte Rosa and northwest to Todi.

This trail is best suit to sure footed hikers with a head for heights. The trail up to the Georgy Hut is steep but should not present any problems unless covered by snow and/or ice. Beyond the hut section of the trail have some exposure. Happily fixed cables safeguard the climb up airy sections of the path.

Pick a beautiful day for this hike and get an early start. The climb to the top will take longer than you expect. You can walk all the way up to the summit from Pontresina but I recommend taking the chairlift to Alp Languard. Using the chairlift will speed the trip to the top, helping your to beat the clouds that typically move in during the afternoon and obscure the great views.

After completing the climb you can then either walk back to Alp Languard or Pontresina, extend the day with a hike to Fuorcla Pischa (Pischa Pass) or visit Lake Languard on the loop trail around the Languard Valley.

In Pontresina, ride the Languard chairlift to Alp Languard. (See trailhead directions below.) Outside the lift station find the trail signpost and start waking east toward Piz Languard and Fuorcla Pischa.

The trail angles up the northeast side of Val Languard (Languard Valley), along the southwest facing slopes of the ridge between Piz Muragl and Piz Languard, accompanied by fine views of Piz Cambrena, Palu and Bernina to the south. At 0.2 miles the trail splits with the path to the right (southeast) heading toward Chamanna Paradis (Paradis Hut) and Lej Languard (Lake Languard). We bear left toward Piz Languard and Fuorcla Pischa.

Turn left toward the summit. The rocky path steepens and becomes more rugged as it switchbacks up the south ridge of Piz Languard to the Chamanna Georgy (Georgy Hut) (10,463-ft.) at 2.25 miles.

The hut, sitting atop a small bench along the south ridge, boasts breathtaking views of the Bernina massif, the Upper Engadine valley and the Bernina Pass area. It’s a great place to take a break, catch your breath and/or purchase some refreshments before the final stiff climb to the summit.

For those interested in sunset or sunrise views, the hut offers dormitory accommodations (reservations required) and meals. A herd of ibex is often seen roaming around the area.

Beyond the hut the airy trail winds through very steep, rocky terrain up the south ridge of Piz Languard, gaining over 230-ft. to the summit. Cables affixed to the rock safeguard the climb up exposed sections of the trail.

Reach the summit of Piz Languard (10,699-ft.) at 2.5 miles. The jaw-dropping, spectacular views make all the hard work worthwhile. To the south the Bernina massif dominates the view. The Morteratsch Glacier, a massive river of ice flows downs the slopes beneath Piz Morteratsch, Piz Bernina, Piz Argient, Piz Zupo and the Bellavista Ridge, while the Pers Glacier adorns the slopes of Piz Palu and Piz Cambrena.

When you are done taking in the views retrace your steps to Alp Languard and the chairlift down to Pontresina for a 5.0 mile hike. Walking up from the Pontresina will add 1.8 miles and over 1,600-ft in elevation gain (one-way) to the hike. If you wish to extend the day, I suggest taking the trail to Fuorcla Pischa or descending to Lake Languard before returning to Alp Languard.

From St. Moritz to Alp Languard: At the St. Moritz Bahnhof, board a #1 bus in the direction of the Samedan Bahnhof. Get off at the Punt Muragl Talstation and change to a #2 bus bound for Pontresina Bahnhof. Ride the #2 bus to the Pontresina Rondo stop. Get bus information from the local tourist office, the Engadine Bus Routes website or the SBB website/SBB app to find the closest stop to your accommodations.

From the Pontresina Rondo, walk southeast on Via Maistra, the main street in Pontresina, for one block to Via da Scoula. Here you will see a street branching left off Via Maistra called Via Cruscheda. Walk up Cruscheda and then turn left to reach the bottom station for the Sesselbahn Languard (Languard Chairlift) to Alp Languard. Signs will mark the turn to the chairlift. The bus ride and the walk should take 20-25 minutes depending on connections.

You can also take the train from St. Moritz bound for Tirano and get off at Pontresina Bahnhof. Exit the train station and turn right, walking along the road which turns into Via da la Staziun. The road soon crosses a river. Beyond the crossing turn right at the “Y” intersection and ascend to cross the highway and then the River Flax. Continue up the road a short distance and cross Via Da Mulin. Just beyond turn right on a walkway (La Senda) that climbs to Via Maistra, the main street in Pontresina. Turn left (northeast) and walk up Via Maistra. Soon you will pass the Hotel Schweizerhof, a peach colored building on the right. At the north end of the hotel turn right (east/northeast) and climb the steps. At the top of the stairs, cross the street and continue heading east/northeast on the side street, past the car park to the bottom station of the Languard chairlift. Trains schedules are available at the SBB website/SBB app.