Valais, near Les Hauderes in The Valais 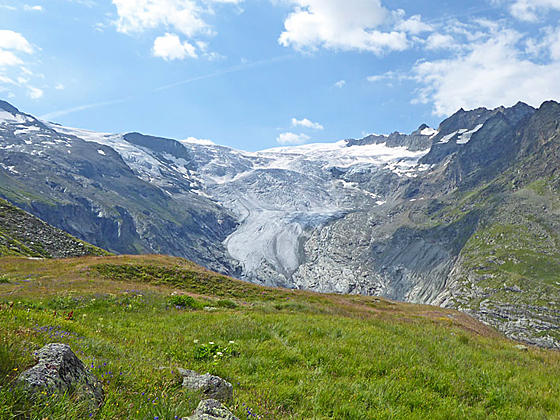 Two rivers of ice, surrounded by towering peaks, flow down the head of the Val d'Herens. This hike ascends the peaceful valley to the stunning viewpoint at Bricola, a high alp overlooking this spectacle of rock and ice. Extend the hike to Les Manzettes for even better views.

From La Forclaz to Bricola 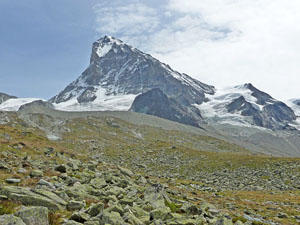 Distance from Trailhead: 10.0 miles (round trip)

Alternate Return Option
From Bricola to Mont Mine Overlook to Les Hauderes: 6.0 miles

From the bus stop at La Forclaz (see trailhead directions) walk southeast on the Route de Ferpecle toward Salay, Ferpecle and Bricola. Signs at the bus stop point the way. In the morning there is little traffic on the road. Ahead are fine views of Dent Blanche (14,291-ft.) and the Ferpecle and Mont Mine Glaciers at the head of the valley. Grand Dent de Veisivi (11,214-ft.) rises to the west.

The paved road descends on easy grades past houses which soon give way to pastures scattered with trees and alp buildings. At 1.0 mile reach an intersection were a yellow trail sign points to the right (south). Turn right on a two-track that descends through a cluster of trees. In 250-ft. turn left on the signed trail toward Salay, Ferpecle and Bricola.

Make note of this intersection. The track continuing to the right descends to Seppec and Les Hauderes. We will make use of this track on the return leg of the hike.

Soon the trail starts ascending on moderate grades through pastures sprinkled with wildflowers and trees, passing a few old wooden alp buildings along the way. The Borgne de Ferpecle, a lovely stream or rushing torrent, depending on the time of year, tumbles down the valley floor below the trail. Yellow diamonds, outlined in black, painted on buildings and rocks will help keep you on track.

At 1.6 miles the valley narrows and the trail rejoins the road. Follow the pave road as it ascends to the tiny hamlet of Le Salay at 2.0 miles. Head through the village on the paved road and soon pass the Le Salay/Ferpecle bus stop on the left side of the road.

Beyond the village the road crosses a creek on a bridge and then climbs through forest, ascending two switchbacks. Parking spaces along the lower switchback are for people visiting the Le Petite Paradis, a small café.

The road soon passes the cafe and then crosses a spillway for the Torrent de Rosses at 2.9 miles. At 3.0 miles reach Ferpecle. Turn left here on a signed trail toward Bricola. The continuation of the road crosses a bridge over the creek and then heads toward the Glacier du Mont Mine. A variation of the route back from Bricola uses this trail. See below for more information.

Note:  Cars are not allowed beyond the turn off to Bricola. If you are driving, find a spot to park in the small lot along the right side of the road.

The grade now steepens as the trail climbs a wooded hillside. Intermittent meadows offer views of Mont Mine (9,560-ft.) and the Mont Mine Glacier. Dent de Veisivi and Pointe de Genevois (12,064-ft.) tower above the west side of the valley. You will also see a spillway for the dam, hidden by dense foliage below the trail. Turn around for views that extend down the Val d’Herens to the high peaks rising above the Rhone Valley.

At 3.4 miles the trees thin and the trail curves left, ascending a few switchbacks on easy grades through rocky meadows scattered with small larches and shrubs. To the south views open to Mont Mine rising between the Ferpecle and Mont Mine Glaciers. Dent de Bertol (11,890-ft.) and Bouquetines (12,592-ft.) rise above the head of the Mont Mine Glacier.

Reach a junction at 3.6 miles. Here a trail branches right, descending toward the Mont Mine Glacier. The sign for this trail simply says “Glacier”. This is an alternate route for the return leg of the hike. For now, we bear left on the continuation of our trail to Bricola and the Bivouac Col de la Dent Blanche.

At 4.7 miles the grade abates and the trail now ascends on moderate to easy grades toward the stone buildings at Bricola, set against a scenic backdrop of peaks and glistening glaciers. At 4.8 miles reach Bricola, a meadow-clad bench with a large, three-story stone building and wood cross. Smaller stone sheds and other out buildings are located above the trail. To the southeast, the summit of Dent Blanche soars above the alp.

Pass between the buildings and soon reach an unmarked trail junction. Turn right on the boot beaten path that passes a few more building as it ascends through meadows to an overlook at the south end of the bench at 5.0 miles. Here stunning, panoramic views encompass the massive Ferpecle Glacier, tumbling steeply down the valley beneath the cirque rimmed by Mont Mine, Tete Blanche, the Wandfluehorn and Dent Blanche. Smaller glaciers; cling to the slopes beneath Dent Blanche.

To the west Mont Mine, Dents de Bertol, Aiguille de la Tsa, Pointe de Genevois and Veisivi tower above the deep trench carved by the Mont Mine Glacier. The leading edge of the Mont Mine Glacier lies beneath Bertol. Behind you views stretch down the Val d’Herens to the Rhone Valley. On a beautiful day the overlook is a great place for a picnic or just to take a break before continuing the hike.

At this point you have several choices.

On the return journey you also have an option of taking the detour to the Mont Mine Glacier viewpoint. 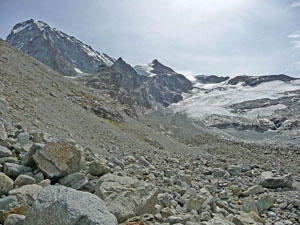 Distance from Trailhead: 12.8 miles (round trip)

From the overlook, return to the junction and turn right on the trail toward the head of the valley.  The path climbs a switchback and then continues ascending on moderately to moderately steep grades up rocky meadows. Use care when crossing the streams at 5.2, 5.4 and 5.9 miles. (The second is typically dry later in the season.) The ascent enjoys terrific views of the Ferpecle Glacier and Dent Blanche.

As you climb the landscape become more rugged with meadows scattered with boulders. Just before crossing the second stream you will see signs pointing left to the route climbing to the Cabane Rossier. Above the trail we get glimpses of the summit of the Grand Cornier and the unnamed peaks towering above the east side of the valley.

At 6.0 miles the grade steepens and views open to the lateral moraine along the north side of the Les Manzettes Glacier. Follow the trail as it climbs switchbacks to the top of moraine at 6.2 miles. After a brief stint atop the moraine crest the trail continues its ascent along the moraine’s rocky south facing slopes, eventually reaching the foot of the Manzettes glacier.

When you are done enjoying the views retrace your steps to Bricola. 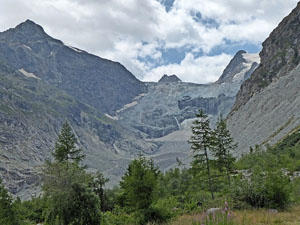 Distance from Trailhead: 13.0 miles (round trip)

To walk back to Les Hauderes, simply retrace your steps for 3.7 miles from Bricola or 5.0 miles from Manzettes, back to the junction with the two-track and the trail described earlier. Here you will find signs pointing toward Seppec/Les Hauderes. Bear left toward Les Hauderes on the two track.

The two-track road descends on easy grades to the hamlet of Seppac and then turns left, dropping through pastures before turning right in half a mile and traveling along a trail that parallels the east/northeast side of the Borgne de Ferpecle (stream). This trail descends on moderate to steep grades through meadows and forest back to Les Hauderes. Total mileage for the return journey is 5.2 miles from Bricola or 6.6 miles from the Manzettes viewpoint.

On the return leg of the hike a short detour will take you to the Mont Mine Glacier Viewpoint. From Bricola, retrace your steps for 1.5 miles to the junction with the “Glacier” sign. Turn left in the direction of the “Glacier.” The path now descends through meadows scatter with trees, passing a small building constructed with cinder blocks.

Reach a bridge over the Borgne de Ferpecle at 1.7 miles. Rocks beside the raging torrent offer great views stretching south to Dents de Bertol and Mont Mine rising above the Mine Glacier. Cross the bridge, turn left and then walk 0.2 miles to the end of the trail and the Mont Mine Glacier Viewpoint for more fine vistas of the river of ice spilling down to the valley floor.

When you are done viewing the glacier follow the road along the west side of the stream back to Ferpecle and then retrace your steps to La Forclaz or walk back to Les Hauderes, following the directions above. The detour to the glacier viewpoint adds about 0.7 miles to the hike.

From Les Hauderes: From the main bus stop in Les Hauderes, take Bus 383 to La Forclaz. The bus stop is located in the large square across from the Hotel des Hauderes. There are about five buses a day and the ride takes 16 minutes. The second bus of the day, leaving later in the morning, typically goes all the way to Ferpecle/Salay. The easy walk from La Forclaz to Ferpecle/Salay is 2.05 miles on a road with very little traffic where you can make great time. See the SBB website or download the SBB app for the appropriate bus schedule. Be sure to select La Forclaz, VS to get the correct route.

Alternatively you can walk all the way from Les Hauderes. Find the trailhead signs in the center of town. Then follow the signs toward Ferpecle and Bricola. The walk from Les Hauderes to Bricola is 5.2 miles and gains 3,088-ft.

There are only a few buses in the afternoon from either Ferpecle or La Forclaz back to Les Hauderes. Typically it is easier/faster to walk all the way back Les Hauderes as opposed to walking back to La Forclaz or Ferpecle and waiting for the bus.

Hikers with a car can drive to La Forclaz and then turn left on the Route de Ferpecle, following the road for 3.0 miles to Ferpecle where you will find parking places.