near Zermatt in The Valais 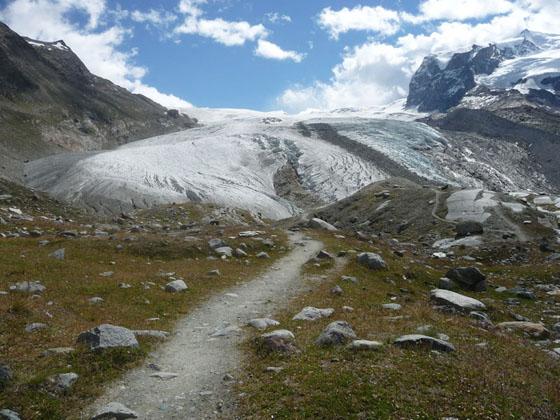 This delightful hike leads to an overlook with front row seats to the amazing spectacle of massive rivers of ice flowing down the flanks of 4,000-meter peaks, joining with the Gorner Glacier to form the second largest glacial system in the Alps. 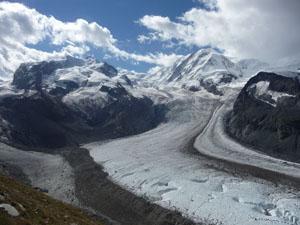 Distance from Trailhead: 3.9 miles (one way)

From the train station in Riffelberg (8,471-ft.), walk a short distance along the west side of the railroad tracks to a “Y” intersection. Here two trails lead to Rotenboden where we pick up the trail to the Gornergletscher (Gorner Glacier) viewpoint. Take the trail branching right (southwest) in the direction of Gagenhaupt (20-min), Riffelsee (1-hr 10-min) and Rotenboden (1-hr 20-min). While this route is 0.8 miles longer, in my opinion it is more scenic. The trail to the left (south), heads over the plateau to Rotenboden (45-min) and Gornergrat (1-hr 40-min).

Follow the trail through meadows with great views of the massive wall of 4,000-meter peaks, including Dent Blanche, the Ober Gabelhorn massif, the Zinalrothorn and the Weisshorn, towering above the Zermatt valley to the northwest. The Matterhorn dominates the skyline to the south.

After passing a pretty little stone chapel with a slate roof at 0.3 miles, the trail continues southwest, ascending the undulating plateau on moderate grades. Ahead the tops of the Klein Matterhorn and Breithorn appear above the plateau. At 0.8 miles the trail curves to the south/southeast as it drops into a shallow valley formed by the Riffelhorn’s eastern ridge and the Riffelberg plateau (to the north). The Riffelhorn (9,603-ft.), a small, triangular-shaped peak rising to the south of the Riffelberg plateau, is a favorite place for climbers to train before tackling the big peaks.

Arrive at Gagenhaupt (8,412-ft.) at 1.0 mile where our path joins a trail coming up from Riffelalp. Continue straight ahead, climbing up the valley on moderate to moderately-steep grades toward the Riffelsee, Rotenboden and Gornergrat. Turn around occasionally for nice views of the Matterhorn, Dent Blanche, the Ober Gabelhorn massif and the Wellenkuppe.

Pass trail junctions at 1.3 and 1.5 miles, ignoring the paths branching left toward Riffelberg. Our route is straight ahead toward the Riffelsee and Rotenboden. After the second signpost the grade abates as the trail travels by a small tarn and then reaches the popular Riffelsee, a small alpine lake cradled beneath the Riffelhorn, at 1.8 miles. On calm mornings the tarn and the lake are a photographer’s delight, with the Matterhorn perfectly reflected in the still waters.

The trail now ascends above the north side of the lake to a junction. Ignore trails climbing uphill toward the Rotenboden train station or ascending east toward Gornergrat. Instead head southeast on the trail toward the Gornergletscher that curves above the east end of the lake and then travels on easy grades toward the edge of the plateau. Along the way pass a signed junction with a path ascending to the Rotenboden train station. We continue straight ahead toward the Monte Rosa Hut and the Gornergletscher.

At 2.3 miles the trail reaches the edge of the plateau and curves left (east). Here we enjoy marvelous panoramic views. Monte Rosa, Liskamm, Castor, Pollux and the Breithorn, covered in snow and ice, dominate the view across the valley. Glaciers, including the Monte Rosa, Grenz, Zwillings and Schwarze, pour off the flanks of the peaks and combine with the Gorner Glacier, flowing down the west side of Monte Rosa, in the Gorner Valley.

Initially the trail ascends 120-ft. to a rock outcropping at 2.5 miles before descending on moderate grades along the south facing slopes of the Gornergrat ridge, accompanied by amazing views of the spectacle of rock and ice across the valley.  Along the way pass a route at 3.3 miles that ascends on very steep grades to Gornergrat. (This is a route, not a trail, and is only recommended for experienced, sure-footed hikers.)

At 3.5 miles the grade abates as the trail travels along the Gorner glacier’s north lateral moraine to the Gornergletscher viewpoint (8,670-ft.) at 3.9 miles, losing over 550-ft. from the plateau. The glacier viewpoint, atop a grassy knoll, offers splendid views of the massive Gorner glacier spilling down the west facing flanks of Monte Rosa to the valley floor where it flows west to a point just below the Klein Matterhorn. The Monte Rosa, Grenz, Zwillings and Schwarze glaciers flow into and combine with the Gorner Glacier to form the second largest glacial system in the Alps, after the Aletsch Glacier. Further down the valley the Breithorn, Triftji, and Unterer Theodul glaciers, former tributaries of the Gorner Glacier, no longer reach the valley floor but instead hang from flanks of the Breithorn and Klein Matterhorn.

The Monte Rosa, Liskamm and Breithorn massifs, along with Castor, Pollux, the Klein Matterhorn tower above the sea of ice. Across the valley on a low ridge to the west of the Grenz Glacier is the new hi-tech glass and aluminum clad Monte Rosa Hut. A pair of binoculars will help you to spot the hut perched atop the bare rock on the rugged ridge.

A route, using ladders to drop down to the Gorner glacier, crosses the glacier and then climbs 1,200-ft. to the hut. Only properly equipped, experienced parties should venture out onto the ice. Over the past decade melting has created major crevasses in the ice flow. Hikers interested in trekking to the hut should inquire about guides at the Zermatt Tourism Office near the train station.

From the Viewpoint to Riffelalp 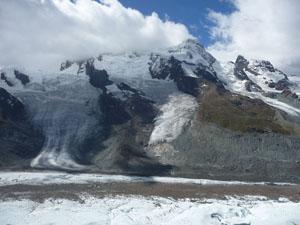 Distance from Trailhead: 8.6 miles (round trip)

When you are done enjoying the views, retrace your steps to the Riffelsee (9,087-ft.) at 6.0 miles. Follow the signs pointing west toward Gagenhaupt, Riffelberg and Riffelalp. Reach a junction at 6.3 miles and turn right (northwest) toward Riffelberg. This path descends across the Riffelberg plateau for 0.7 miles to Riffelberg for a total round trip hiking distance of 7.0 miles.

To return to Riffelberg along the original route or walk to Riffelalp, at the junction at 6.3 miles, continue straight toward Gagenhaupt, Riffelberg and Riffelalp. Ignore a second sign pointing left to Riffelberg at 6.5 miles. Follow the trail as it drops down the narrow valley between the Riffelberg plateau and the Riffelhorn’s eastern ridge.

Reach Gagenhaupt junction at 6.9 miles. To return on the original route, take the trail branching right (northwest) and climbing the hillside to the Riffelberg plateau. From the signpost back to Riffelberg is 0.9 miles for a total hiking distance of 7.8 miles.

Alternatively, if time and energy permit, continue straight ahead toward Riffelalp and Zermatt. Soon the trail curves northwest and then north/northeast on a descending traverse down the steep slopes beneath the Riffelberg plateau, passing through rocky meadows that are soon populated with scattered larches. Occasional switchbacks facilitate the moderately-steep descent. Ignore any signs pointing toward the Gletschergarten, Furi and Zermatt.

Along his section of the hike enjoy great views of the Matterhorn towering above the Matterhorn Plateau. Dent Blanche, the Ober Gabelhorn massif, the Zinalrothorn and the Weisshorn, fill the skyline to the northwest while the Taschhorn and the Dom form a backdrop to the Oberrothorn to the northeast. As you descend, views open to Furi, Riffelalp and Zermatt.

At 8.3 miles, just above Riffelalp, our trail joins with a path coming up from the Gletschergarten. Soon the trail breaks out of the trees, passes a small chapel and a tennis court to meet a road in the Riffelalp Resort complex (7,454-ft.) at 8.5 miles. Here signs point right (northeast) toward the Riffelalp train station and a trail back to Winkelmatten and Zermatt.

To take the train back to Zermatt, turn right (northeast) and walk through the resort complex on a broad track. Beyond the hotel continue along the track, which parallels the course of a small cog railway used to transport luggage and passengers to the resort. Arrive at the Riffelalp Train Station (7,254-ft.) at 8.6 miles where you can hop on a train back to Zermatt.

To walk back to Zermatt from Riffelalp follow the signs pointing towards Winkelmatten (a suburb of Zermatt) and Zermatt. The trail descends on moderately-steep grades through forests and meadows, passing a few chalets along the way. Intermittent openings in the trees offer nice views of the Matterhorn. Reach the small church in the middle of Winkelmatten at 10.8 miles. In Winkelmatten follow the signs back to Zermatt and the Zermatt train station. Walking all the way to the Zermatt Bahnhof (train station) will add another 0.6 miles to the day. 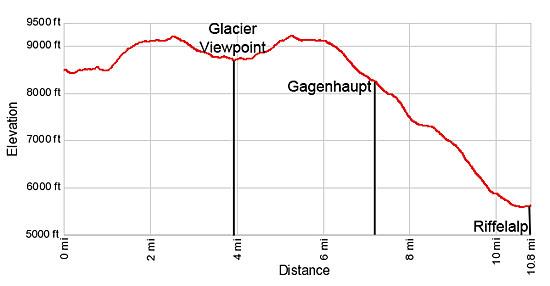 Walking Directions From the Zermatt Train Station (Bahnhof) to the Gornergrat Cog Railway: The Gornergrat Cog Railway is directly across the street from the Zermatt Bahnhof. During the height of the summer trains run from 7 am until 8 pm. There are also some special sunrise trains that start as early as 5 am (advanced booking required). Check at the station or the main tourist office for current schedule. It takes 23 minutes to reach Riffelberg.

Note: During the height of the day the trains get crowded and you may need to wait to board a train. It is best to get an early start and beat the crowds.