near Zinal in The Valais 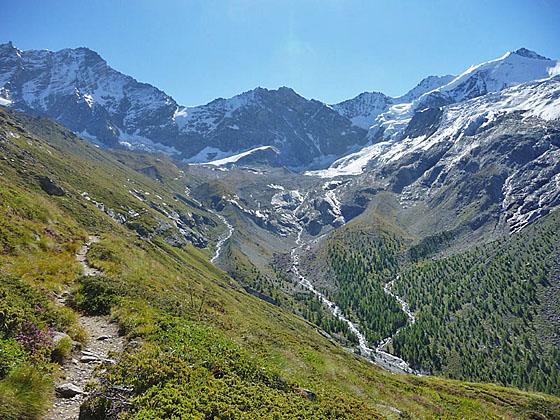 The long and strenuous climb to the Cabane Arpitetta features wonderful views of the glacial cirque at the head of the Arpitetta valley, dominated by the Weisshorn, Zinalrothorn, Moming massif and the Moming glacier. 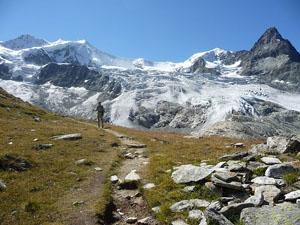 This hike starts on Zinal's (5,479-ft.) main street. (See trailhead directions below.) Walk south (toward the head of the valley) along the main street to a car park at 0.6 miles. Turn right (west) and cross the wood bridge over the La Navisence River, the river draining the Zinal Valley. On the west side of the river turn left (south) and continue walking up the Zinal valley toward the Petite Mountet (1-hr 50-min) and Grand Mountet (4-hr 10-min). The broad track ascends through pastures on easy grades with nice views of Besso towering above the east side of the valley.

Pass a junction at 1.7 miles with a route branching left toward Lac Arpitetta and the Arpitetta Hut. We continue heading south on the track, which starts ascending on moderately-steep grades up a wooded hillside along the west side of the valley.

At 2.2 miles the trail travels by a pretty waterfall and then climbs a switchback. Soon the path reaches a junction at Le Vichiesso (6,109-ft.). Here a trail branches right toward the Petite Mountet (45-min). We stay on the main track toward Petite Mountet (1-hr), Grand Mountet (3-hr 20-min) and the Arpitetta Hut.

The grade eases at 2.5 miles as the trail ascends along the hillside. La Navisence tumbles down the rocky riverbed below the trail. Reach a junction at 2.9 miles and turn left (east) on the trail toward the Grand Mountet and Arpitetta. The trail to the right leads to the Petite Mountet Hut.

Our trail drops down to and crosses La Navisence on a bridge. The Grand Cornier dominates the view to the south. On the east side of the river is a “Y” intersection. We turn left toward Arpitetta and Roc de la Vache. The trail to the right heads to Cabane du Grand Mountet.

Follow the trail a short distance as it curves to the right (east) and crosses a bridge over the Torrent de l’Arpitetta, a glacial stream draining the Arpitetta Valley, at 3.1 miles. On the north side of the stream the trail climbs steep switchbacks up a wooded hillside at the foot of the Arpitetta Valley.

At 3.5 miles the trees give way to grassy slopes and pastures of Le Chiesso, a small Alp. From the Alp fine views open Pigne de la Le, the Grand Cornier, Dent Blanche and Pointe de Zinal rising along the west side of the Zinal Valley. Besso, the Blanc de Moming and Pointe Sud de Moming tower above the south side of the Arpitetta valley.

Beyond the alp the trail climbs a long, steep switchback through low-lying shrubs and scattered trees, passing a junction with a route branching left that descends to Zinal. At 3.9 miles the trail curves to the right and reaches a “Y” intersection at Lac Arpitetta (7,375-ft.). (The lake is actually a short distance beyond the sign.) The trail to the left climbs to Roc de la Vache (1-hr 10-min). We turn right (southeast) toward the Arpitetta Hut (1-hr 40-min) on a trail ascending along a gully with nice views of Besso.

After soaking in the views continue along the trail as it heads east through pastures, passing a second trail branching left toward Roc de la Vache. Beyond the junction the trail heads east, crosses the lake’s inlet stream and then ascends on moderate grades high above the north side of the Arpitetta Valley. As you climb enjoy every improving views of the Moming glacier spills down the flanks of the Moming massif. Waterfalls, fed by glacial meltwater, tumbled down the rugged slopes beneath the glacier.

At 4.5 miles the trail rounds a minor ridge and the Weisshorn and Schalihorn join the scene. Turn around occasionally for nice views of the La Le meadows, nestled in a bowl beneath the Pigne de la Le and the Garde de Bordon to the west.

At 4.8 mile the trail starts ascending steep switchback along the south facing flanks of Pointe d'Arpitetta. The grade abates briefly at 5.3 miles as the trail contours along the steep hillside and crosses several streams. Soon the trail resumes its steep ascent through rocky meadows and scree covered slopes. Temporary bridges facilitate the crossing of gushing streams carrying glacial meltwater at 5.8 and 5.9 miles.

Beyond the last stream the trail climbs steep switchback through rocky meadows with glorious views of the Moming massif, the Moming Glacier and Besso to the south. The Weisshorn soars above the head of the valley to the east. Reach the Cabane Arpitetta (9,140-ft.), a nice old stone hut situated at the foot of the Weisshorn’s west facing slopes, at 6.3 miles.

From the hut stunning, panoramic views extend west to Besso and the Pointe d’Arpitetta bookending the foot of the Arpitetta Valley. The Moming massif fills the skyline to the south with the tip of the Zinalrothorn peeking above the ice covered peaks. The Moming glacier spills down the flanks of the massif to a huge bowl and then cascades over the lip of the bowl down the rugged slopes across from the hut. The Weisshorn dominates the views to the east. A small section of the Weisshorn glacier is visible to the north of the hut, below the Tete de Milon. Unfortunately a high moraine wall limits the views of the glacier to the east.

When you are done taking in the views retrace your steps to Zinal. Energetic parties should consider returning to Zinal via the Roc de la Vache trail. This option adds over 1,300-ft of elevation gain and 0.4 miles to the return journey to Zinal.

Note: A guardian is present at the hut during the summer months. Hiker with reservations can stay overnight but no meals are served. Be sure to pack water, lunch and plenty of snacks for your day hike and all the food you will need if you plan to spend the night at the hut. 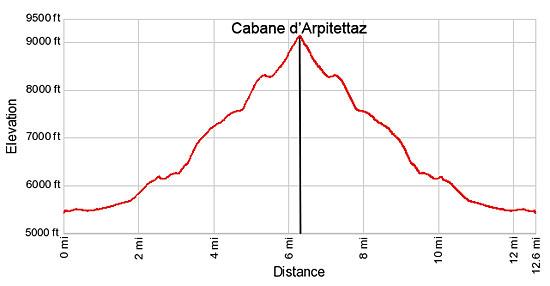 Directions in Zinal: From the Post Office/Bus stop in Zinal walk south along the Rue des Cinque 4000, the town’s main street. The mileage in this description starts the hike a few blocks beyond, near the tennis courts and ice skating rink.

From Grimentz to Zinal: From the Grimentz post, board the bus to Zinal and get off at the post office stop. If possible catch a direct bus to Zinal. Otherwise, take the Vissoie Bus to Vissoie where you will need to change for a bus headed up the valley to Zinal. The direct buses take 15 minutes. If you need to change in Vissoie the ride will take 58 minutes or longer.

Buses make several stops in Grimentz. Schedules are posted at the bus stops and are available online at the SBB website and the SBB app.