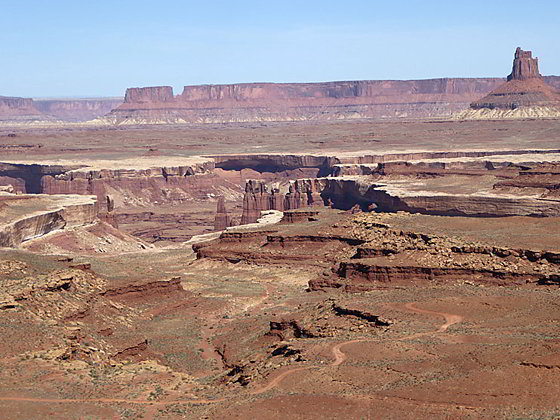 View to the north along the Hogback

This trail, one of the most scenic in the Island in the Sky District of Canyonlands, features great views of Grand View Point, Junction Butte, Ekker Butte and other unnamed buttes and towers rise above the White Rim plateau. Look carefully and you will see the Green River snaking through Stillwater Canyon beneath the White Rim. In the distance vistas stretch south and west to formations in Glen Canyon and the Maze and the Needles Districts of Canyonlands.

The trail starts with a scenic hike across a grassy plateau atop the Island in the Sky to an amphitheater along the rim. Here the trail loses 850-ft. as it descends steeply down a rockslide and then talus slopes to the Murphy Hogback, a flattop ridge with see forever views. The path then follows the ridge to the White Rim Road and another scenic overlook.

This hike is totally exposed to the sun and is only recommended during the Spring and Fall when cooler temperatures make the climb back to the rim tolerable. Be sure to take plenty of water and food. Trekking poles are also helpful during the steep descent and ascent. The rocky trail down the rockslide is well constructed but has some minor exposure. As such this hike is not recommended for anyone with a fear of heights

Note: The most scenic way to walk this trail is to take the Murphy Hogback trail out and back to the viewpoint at the Murphy campground along the White Rim Road. The hike can be turned into a loop by following the White Rim Road from the Murphy Campground viewpoint east for 1.3 miles to Murphy Wash and then ascending the wash to the trail leading to the rim. Personally I prefer to walk the Hogback in both directions and forgo the wash that is not as scenic. 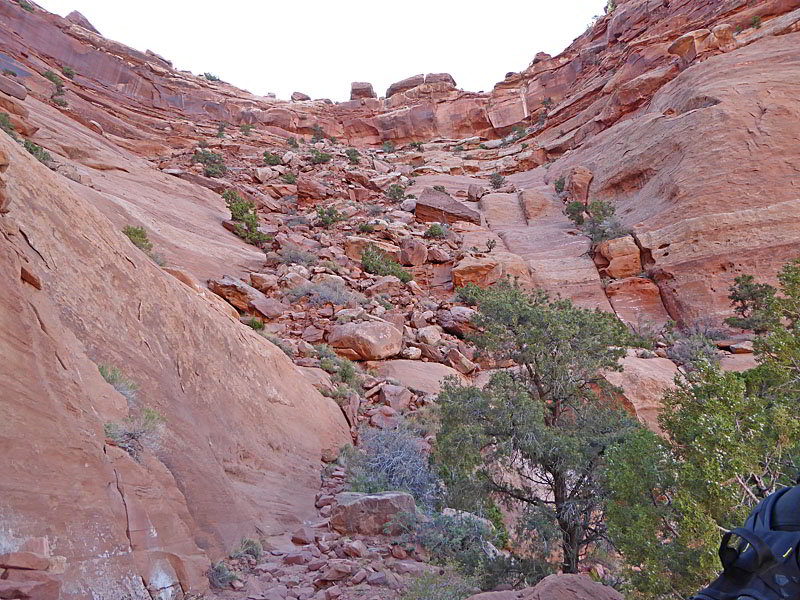 From the trailhead parking area (see driving directions below) the Murphy trail heads southwest, descending gently across a grassy plateau. At 0.4 miles reach a “Y” intersection where the Murphy Point Overlook trail continues straight ahead for 1.3 miles to a viewpoint. We bear left on the Murphy Trail toward the White Rim Road.

After a mile the trail reaches the edge of the plateau where views extend west to sea of red rock mesas, plateaus and formations. The aptly named White Rim, a wide sandstone plateau atop the Cutler Formation, and the Murphy Hogback, a long tongue of Moenkopi Shale that rises above the White Rim Plateau, are clearly visible from this vantage point.

At the edge of the plateau our trail turns left (south/southeast) as it drops into an amphitheater and then travels along a series of ledges to a rockslide covering the plateau’s Wingate Sandstone walls. Here the trail turns right and descends steeply down the rockslide on switchbacks. The descent is accompanied by far reaching views of the mesas and formations to the west, the White Rim and the Wingate walls of the amphitheater.

At 1.3 miles the trail reaches a wood bridge spanning a gap in a ledge. Near the bridge look up to see 1940’s inscriptions etched into the canyon’s wall by Jean Idiart and Darwin Allies. Beyond the bridge the trail reaches the talus slopes of the Chinle formation where the path curves to the southwest as it continues its steep descent toward the White Rim Road. Turn around for great views of the rockslide and amphitheater. Soon views open to Junction Butte and, as the trail swings to the south, the southwestern tip of Grandview Point. 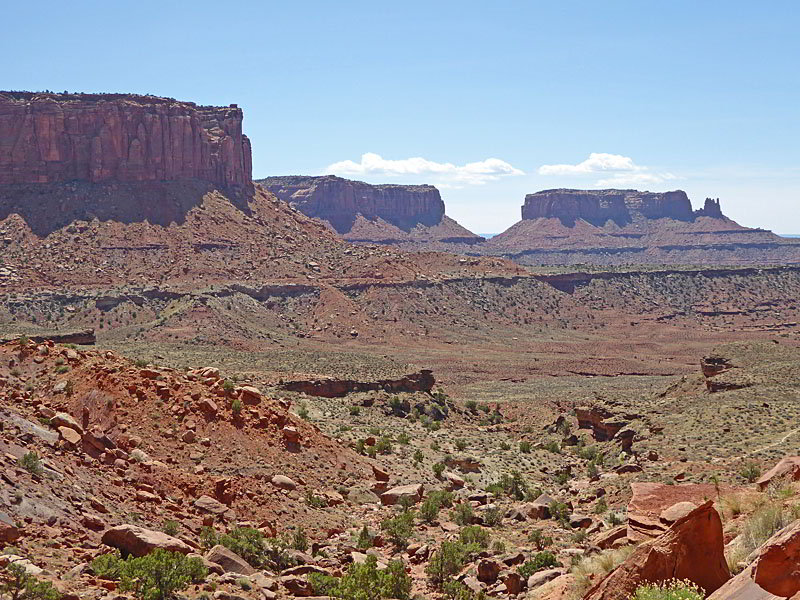 The descent ends at a trail junction at 1.8 miles after losing about 850-ft. To the left is the trail to the White Rim Road via the Murphy Wash. To the right is the Murphy Hogback trail. For the best views turn right on the Hogback trail.

The Hogback trail heads west along a Moenkopi Shale bench set beneath the sheer walls of Murphy Point. To the west/southwest a vast red rock landscape stretches as far as the eye can see with great views of Junction Butte, the end of Grand View Point, Ekker Butte and a sea of canyons, buttes, mesas and plateaus.

After half a mile the trail starts swinging to the right as it curves around the end of Murphy Point. Ahead views soon open to the Hogback, a long narrow flat-topped ridge of Moenkopi Shale that rises 200 to 300-ft. above the White Rim plateau.

At 2.9 miles the trail curves to the left (southwest) and begins traveling atop the Murphy Hogback. To the northwest is Candlestick Tower, a distinctive 450-ft. tall sandstone butte. To the north are superb views of the Island in the Sky towering above Soda Springs Basin. To the west/southwest the plateaus of Glen Canyon and the Maze fill the skyline. 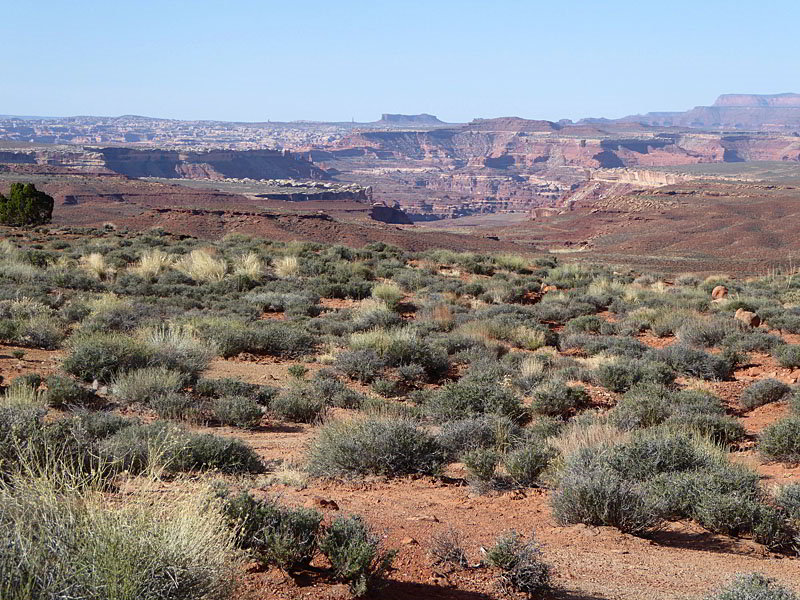 As you proceed along the trail views open west to the White Rim rising the above a long meander of the Green River as it flows through Stillwater Canyon. The White Rim Road snakes along the plateau beneath the Hogback ridge. Behind you Murphy Point and the sheer walls of Grand View Point dominate the view.

At 4.6 miles the trail reaches the White Rim Road. Turn left and follow the road to the Murphy Hogback campground A and a viewpoint at 4.8 miles. To the south the White Rim rises above the deep canyon carved by the Green River. In the distance is the Maze District of Canyonlands where a tangle of formations and canyons stretch for as far as the eye can see.

To the east/southeast the White Rim roads descends from the Hogback and crosses Murphy Wash. Below this point Murphy Wash spills over the edge of the White Rim and becomes a deep canyon that eventually flows into the Green River. 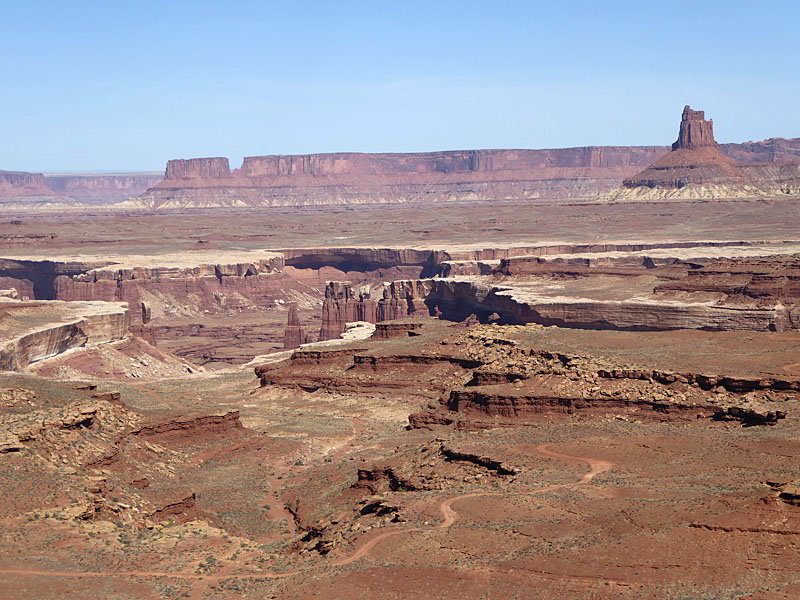 At this point you have a choice. You can do a loop by following the White Rim Road east for 1.3 miles to Murphy Wash, the low point of the hike (4,806-ft.). Turn left and ascend the wash, carefully watching for rock cairns to keep you on track. Along the way the trail passes an old corral and circumvents an eight foot pour-off by taking a bypass trail to the right. A second bypass is required before reaching the junction with the Hogback trail and the trail to the rim at 8.8 miles. Climb back to the rim for a 10.4 miles hike.

While it may be tempting to take the loop, the trail up the wash is not nearly as scenic as the Hogback Trail. My advice is to reverse course at the viewpoint and retrace your steps along the Hogback to the junction and then climb back to the trailhead for a 9.6 mile round-trip hike.