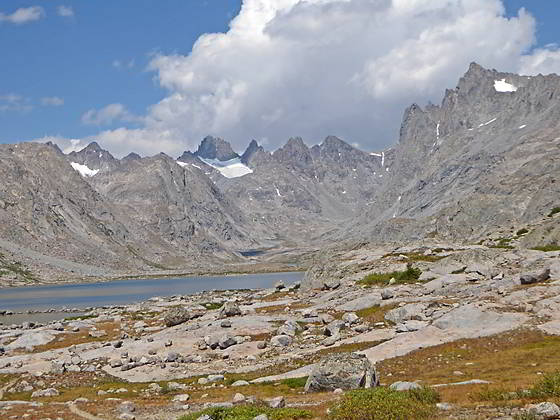 Cirque at the head of Titcomb Basin

This hike starts from at the unmarked junction at the southeast end of Island Lake (10,346-ft.). The trail to the left (northwest) leads to campsites along the lake’s southwestern shore. The trail straight ahead (northeast) is the Indian Pass trail.

Follow the Indian Pass trail as it skirts the eastern shore of Island Lake. Along the way enjoy fine views of the summits towering above Titcomb Basin to the north. Elbow (11,948-ft.) and Sky Pilot (12,129-ft.) peaks rise in the distance to the northwest.

Pass an unmarked trail/route at 0.3 miles climbing to Pass 11120, a saddle on the ridge between the Island and Wall Lake basins. Soon our trail curves to the left (northwest) around the northeast lake shore and starts climbing.

At 0.7 miles the path curves to the right north and ascends the north side of a draw to a saddle on a low ridge at 0.9 miles. Atop the ridge are more great views of the summits of Titcomb Basin.

The trail now descends through meadows into a pretty basin cradling Lake 10,467. Pass above the lake’s eastern shore and then climb around a minor ridge at the northeast end of the lake, paralleling the lake’s inlet stream (the creek draining Indian Basin).

A short distance past the junction the trail crosses the stream draining Indian Basin by hopping across the large boulders that litter the creek bed. Beyond the crossing the trail traverses meadows and passes a small pond. The path now weaves through rock outcroppings as it ascends a hill to a gap strewn with large boulders. Squeeze through the gap and then climb over a low hump, emerging onto the rocky meadows at the foot of Titcomb Basin at 1.6 miles.

Travel is now easy as the trail skirts the eastern shore of Lake 10,548, reaching the northern end of the lake at 2.2 miles. Here the trail climbs a rocky knoll on moderate grades and then descends into the next lake basin. Ahead, views open to Lower Titcomb Lake (10,575-ft.) sprawled across the valley floor.

The path now traverses through meadows strewn with boulders along the lake’s eastern shore. To the west views open to Titcomb Needles. The rugged west facing slopes of Fremont Peak (13,745-ft.) loom over the trail to the east.

Reach the head of the lower lake at 3.3 miles. Cross the isthmus separating the upper and lower lakes, briefly traveling along the east side of the outlet stream for the upper lake before arriving at the southeastern shore of Upper Titcomb Lake (10,598-ft.) at 3.6 miles.

The trail now travels through rocky meadows and small talus fields along the east shore of the upper lake. Across the lake a waterfall, emanating from Summer Ice Lake (11,170-ft.), cascades down a rocky gully along Titcomb Basin’s western wall. The unseen lake lies in a small cirque formed by The Great Needle (12,714-ft.), Henderson Peak (13,115-ft.), American Legion Peak (13,205-ft.), Winifred Peak (12,775-ft.) and the Buttress (12,205-ft.). Along the east side of the basin Mount Sacagawea (13,569-ft.) towers overhead while the distinctive towers and spires of Mount Helen (13,620-ft.) dominate the east wall beyond the lake.

Pass the north end of the upper lake at 4.3 miles. Here the trail starts climbing on easy to moderate grades through meadows and then across large rock slabs. Rock cairns mark the trail across the slabs. The trail gets harder to follow as you near the head of the basin.

The open country invites exploration and is a photographer’s delight. Wander as far up valley as time and energy permit and then find a good perch to take in the views. When you are done absorbing the amazing scenery retrace your steps.

Backpacker looking to camp in Titcomb Basin will find the best sites to the south of Lower Titcomb Lake. Climbers typically setup camp in the upper basin, beyond the lakes. Finding a level campsite that is at least 200-ft. from trails and water is somewhat of a challenging. Hanging food is also problematic due to the lack of trees. You will need to find a large boulder to hang your food or carry a bear container.

Directions from Pinedale: From the intersection of Pine Street (US 191) and North Tyler Ave (the Pinedale Tourism office is located on the northeast corner) in Pinedale, WY, drive east on Highway 191 (East Pine Street) for 0.3 miles and bear left onto Fremont Lake Road. Follow this road for 14.3 miles and turn right into the large parking area for the Elkhart Park/Pole Creek Trailhead. After the first 3.0 miles the road will turn into Skyline Drive/Forest Service Road 370740. The trailhead is located at the northeast end of the parking lot between the outhouse and the trailhead kiosk. It should take about 25 minutes to drive the trailhead. The last section of the road has some holes and uneven spots.