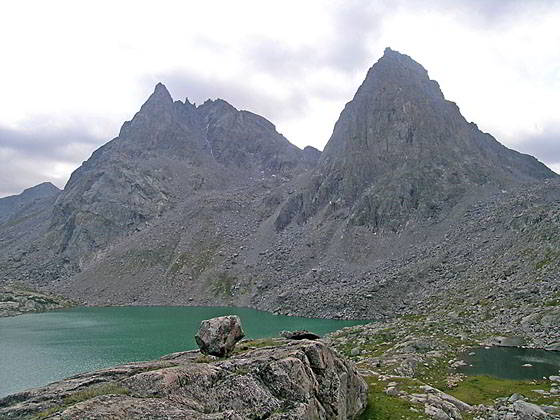 The half mile segment of the trail obliterated by the rock slide is just below Dale Lake and Cube Rock Pass. Many backpackers use four letter words when describing the route through the rock fall. My advice is to avoid this trail if you dislike climbing or descending boulder fields.

The junction of the Highline and Vista Pass trail is located 0.7 miles to south of Trail Creek Park and 1.8 miles north of Green River Pass. From the junction on the Highline, the Vista Pass trail heads southeast climbing moderate switchbacks up a wooded hillside. At 0.7 miles the grade abates and the forest opens as the trail head east across a broad ridge. Along the way the trail skirts the north side of a nice pond at 0.9 miles and reaches Vista Pass (10,160-ft) at 1.0 mile. Nice campsites are located near the pond and around the pass. This is a last good camping area along the trail until you reach Dale Lake.

At 2.1 miles the trail ends at the base of a boulder field. For the next half mile the trail has been wiped out by a rock fall. Remnants of the trail and rock cairns now mark the way. The route through the slide ascends through talus and then crosses to the east side of the valley. Here vestiges of the trail are found along the talus slopes 50-60-ft above the valley floor.

At 2.6 miles the trail becomes easier to follow as it turns to the left and climbs to the basin holding Dale Lake (10,685-ft.) at 2.7 miles. The trail now traverses through the rocky meadows above the north side of the lake. Midway along the lake the trail resume climbing on easy grades, reaching the top of Cube Rock Pass (10,750-ft.) at 3.0 miles. Cross to the east side of the pass where views open to Peak Lake, a turquoise jewel, cradled at the foot of a magnificent cirque of jagged 12,000- and 13,000-ft. peaks.

I recommend taking a side trip to Peak Lake. From the junction the spur trail descends for 0.3 miles to the lake’s western shore. From this vantage point fantastic views extend west to a trio of captivating peaks; G4 (12,845-ft.), Split Mountain (13,155-ft.) and Twin Peaks (13,185-ft.). Knapsack Col, a pass on the route crossing to Titcomb Basin, lies to the south of Twin Peaks. Pyramid-shaped Stroud Peak and Sulphur Peaks, a duo of photogenic peaks, dominate the view along the lake’s southern shore.

The headwaters of the Green River, emanating from the Stroud Glacer tucked into a bowl beneath the east facing slopes of Stroud Peak, flow into the east side of Peak Lake. The lake’s outlet stream, along the north shore, cascades down a steep gully lined with talus slopes into Stonehammer Lake, which drains into the Green.

To continue over Shannon Pass, bear right (southeast) at the junction and follow the Shannon Pass trail as it descends for 0.15 miles and then starts climbing on steep to moderately steep grades up rocky switchbacks, passing to the east of a small pond. Your goal is the saddle on the ridge between Mount Oeneis (12,232-ft.) and Stroud Peak (12,198-ft.).

At 3.8 miles the grade eases as the trail reaches Shannon Pass (11,160-ft.) and skirts the left (east) of two ponds. Stroud Peak soars above the east side of the broad saddle.

The initial descent from the pass is on easy grades across a broad plateau. To the southeast Henderson Peak, G17 and the other high peaks rising above Upper Jean Lake dominate the view. Soon views open to Elbow Peak (11,948-ft.) towering above the Elbow Lake Basin to the southwest.

At 4.3 miles the descent steepens as the path drops down rocky meadows and crosses a stream. Beyond the stream a short, easy climb leads to the signed junction at 4.5 miles. Here the Shannon Pass Trail ends. Turn right (southwest) to head north-bound on the Highline toward Elbow Lake, Summit Lake and the Green River Lakes. Alternatively continue straight ahead (southeast) on the south-bound Highline toward the Jean Lakes and Island Lake.

The Route to Knapsack Col: A very strenuous route travels through the talus slopes above the north side of Peak Lake and then ascends the rugged cirque, initially along the lake’s inlet stream, to Knapsack Col. The final climb to the Col is up steep scree slopes. Backpackers making it to the top of the Col, a saddle on the ridge between Twin Peaks and Winifred Peak (12,775-ft.), are rewarded with breathtaking views of the high peaks towering above the head of Titcomb Basin. On the east side of the pass the route descends on extremely steep grades down Twins Glacier and talus slopes to the basin.

Note: This route should only be attempted by experienced parties comfortable with route finding and climbing/descending steep scree slopes, which may be partially covered with snow and/or ice. This route can be quite hazardous depending on the condition of the glacier and/or if a snow cornice is present at the top of the pass. Carry an ice axe and crampons for safety. Check on current condition at the ranger station or the Great Outdoor Store, both located in Pinedale. Be prepared to turn around if conditions are unfavorable.

Directions from Pinedale: From the intersection of Pine Street (US 191) and North Tyler Ave (the Pinedale Tourism office is located on the northeast corner) in Pinedale, WY, drive west on Highway 191 (West Pine Street) for 6 miles and then turn right on WY-352 toward Cora. Follow WY-352 for 14.3 miles and turn right on County Road 162, a dirt road signed for New Fork Lakes. Follow the road for 4.8 miles to the end of the road. Along the way the road name will change to New Fork Lakes Road/Forest Service Road 732/730. The New Forks Lake parking area is on the left. The trailhead is located at the northeast corner of the lot.

The 25.2 mile trip should take about 40 minutes. Passenger cars can typically make it to the trailhead without any problems.