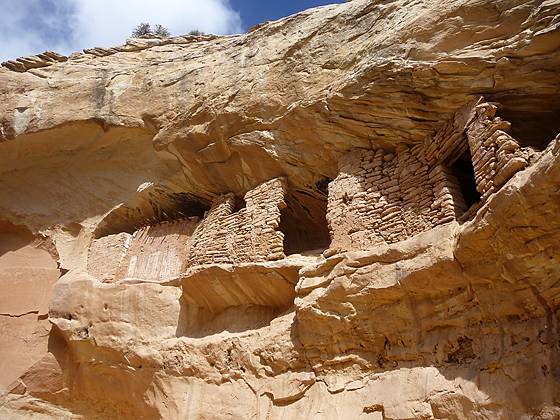 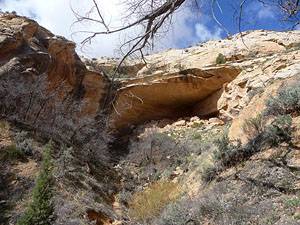 The trailhead for West Fork of Upper Butler Wash is located at a small parking area along the northwest side of UT-95, 14.5 miles from Blanding, Utah. (See the driving directions for more information.)

Proceed through an opening in the fence on the northwest side of the parking area and find a brown mylar BLM stake marks the beginning of the trail. Follow the trail as it heads north, descending to the grassy bench on the west side of the wash. The canyon at this point is nothing more than a shallow draw. The Trail travels along the bench on easy grades beneath Cottonwoods trees, occasionally crossing the wash to avoid heavy brush and other obstacles.

After walking above a quarter mile the trail curves to the northwest and enters the West Fork of upper Butler Wash. After walking a little over 0.6 miles pass the mouth of a small side canyon on the left (west). A high dryfall at the opening makes it very difficult to enter the canyon. Continue past the mouth of the canyon and find a steep, boot-beaten path climbing south/southwest up the west side of the canyon at 0.75 miles.

The short, very steep trail climbs to a bench and then descends a slickrock slope into the side canyon. As you descend look for ruins in the large alcove at the head of the canyon and a second set of ruins tucked in a small alcove along the canyon’s south wall.

As the trail nears the canyon floor views open to a very interesting set of ruins wedged in a shallow alcove about halfway up the north wall. Boulders on the canyon floor directly beneath the ruins offer a nice spot to sit and examine the structures, some of which are in very good shape. Wood ceiling beams and the wood posts across the top of a doorway are visible. The stucco coating the exterior wall as well as remnants of white paint along the bottom half of the wall is still intact on the best preserved structure. If you look closely through openings in the front wall on the right side of the alcove you will see some of the interior walls.

A use trail climbing the canyon’s south wall leads to the large alcove at the head of the canyon. The alcove harbors the remains of a small ruin and evidence of other structures. Metate grooves are carved into a few of the large boulders on alcove’s floor. Faint red handprints are seen along the back wall.

Please remember when visiting an archaeology site never climb, sit or walk on the walls and do not enter the rooms. Do not touch the rock art. Oils from your hands can cause the paint to flake from the walls. Stay out of the middens, essentially the prehistoric trash mounds, typically located immediately down slope of an alcove or cliff site. Leave any pot shards, corn cobs or other relic where you found them.

A vantage point near the alcove offers a great view of the ruins along the north wall. With binoculars or the zoom lens of a camera you should be able to see the top of a white bull’s-eye painted on the left sidewall of the structure with the ceiling beams. This set of structures is sometimes referred to as Bulls-eye ruin because of this pictograph.

The small alcove on the south wall is much harder to view. Good climber can ascend boulders beneath the alcove to a spot with a view of the interior. Here you will find the remains of the wall. When you are done exploring, retrace your steps to the main trail.

Continue hiking northwest up the West Fork of Butler Wash. In three-tenths of a mile look to your left (west) for a large east facing alcove. If you look carefully at the alcove you will see the second set of ruins in the canyon. This is Ballroom Cave.

To visit Ballroom Cave, follow the obvious use trail that climbs steeply up rocky slopes to the base of the alcove. Archaeologists believe the ruins in this alcove were inhabited between A.D. 1150 and 1350. On the left side of the alcove is possibly a defensive wall with peepholes, offering views up and down the canyon. Below the defensive wall are the remains of a semi-subterranean kiva.

Ballroom Cave includes the main alcove and two caves. The first cave is an interior cave located on the left side of the alcove, behind the defensive wall. A steep trail leads down into the large cave to the left. Inside the cave are the remains of two walled enclosures.

The second smaller cave is located on the right side of the alcove. To the right of the small cave is a block of rooms that includes a square kiva with some of its roof beams still intact. There is a bench along the back of the kiva and the plaster walls are heavily sooted. Above the kiva is a rock art panel that includes three human figures painted in red and yellow along with reverse handprint pictographs. To the right of the square kiva are the remains of a two story structure. Part of the ceiling/floor of the structure remains allowing visitor to see how the building was constructed.

After investigating this set of ruins continue up the main canyon for less than one-tenth of a mile to the third set of ruins, located in an east facing alcove/cave along the canyon’s western wall. A packed sand trail leads to the base of a sheer sand wall beneath the alcove. Getting up the first part of the wall is a challenge since the sand gives way as you climb the steep slope. It is helpful to have a partner push you up the slope. The second part of the wall is easily scaled thanks to a strategically placed wood ladder.

The deep alcove includes the remains of the set of structures and a partial wall. The back of the alcove, reached by climbing a sand embankment, is empty. Soot coating the ceiling certainly indicates this portion of the alcove/cave was inhabited at some point.

A little over a tenth of a mile beyond the third set of ruins is the fourth and final set of ruins that I found in the canyon. Here a bay in the canyon houses two east facing alcoves, one atop the other. A use trail leads to a small, shallow overhang to the left of the lower alcove. Here you will find a small segment of a wall and rubble. The large alcove to the right appears to be empty.

You can continue wandering up the pleasant canyon past the last set of ruins. I did not go very far before turning around.

If time permits consider visiting the Butler Wash Ruins near Upper Butler Wash. The entrance to the ruins is on the right, 0.3 miles to the southwest of the West Fork pullout on UT-95. The paved entrance road leads to a large parking area and restrooms.

The Butler Wash Ruin is a cliff dwelling that was built and occupied by the Ancestral Puebloans in about 1200 AD. Within the alcove are habitation, storage and ceremonial structures, including four kivas. Parts of the site have been stabilized and reconstructed but most of the ruin remains as it was found in the 1800s.

A BLM trail to the site winds its way along slickrock and crosses washes to reach an overlook with nice, if somewhat distant, views of the cliff dwelling. Round trip hiking distance is 1 mile. An interpretive sign located at the overlook provides information on the ruins and its inhabitants. 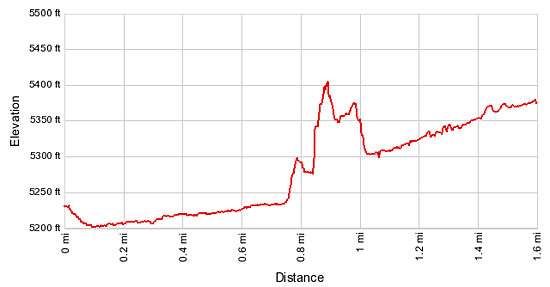 From Blanding: Drive south on US 191 S for 4 miles and turn right (west) on UT-95 N. Follow UT-95 for 10.5 miles to a road side pullout on the right (northeast) side of the road near the sign for the “Butler Wash Ruins.” Park at the pullout. If you reach the turnoff for the Butler Wash Ruins you have gone too far. Turn around and head northeast up the UT-95 for 0.3 miles to the pullout.

Other Hiking Regions in:
Utah