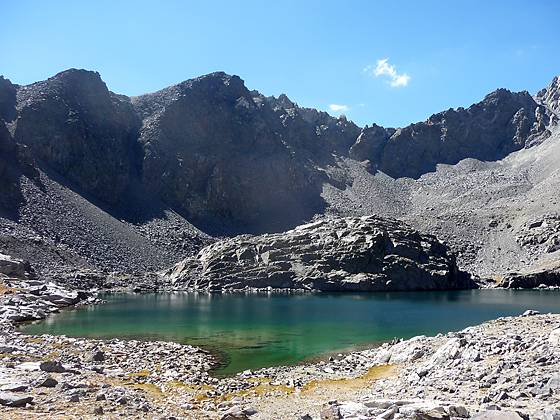 The hike to Tamarack Lakes provides an opportunity to get off the beaten path in the popular Rock Creek drainage. The trail traverses a series of low ridges along the south side of a broad valley before climbing the East Fork of Rock Creek to a stark lakes basin in a rugged cirque. 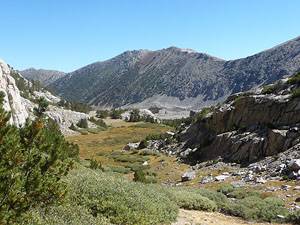 The hike to Tamarack Lakes starts with a steep climb up a forested hillside to the east of the Rock Creek Lake Campground. At 0.2 miles reach a junction with a trail ascending from the southern end of the camping area. Veer left following the main trail as it ascends the wide, dusty track skirting talus slopes cascading from the ridge to the southeast of the trail.

Just beyond the junction pass signs for Dorothy and Kenneth Lakes and the Wheeler Crest pointing straight ahead, in the direction you are walking. Openings in the trees along this section of the trail offer good views of the peaks rising above the Little Lakes Valley to the south and lining the valley wall to the west of Rock Creek Lake.

At 0.6 miles the grade levels as the trail contours around the end of the ridge through a forested landscape with limited views. Reach a trail junction at the one mile mark and take the trail heading right (southeast) toward Kenneth Lake and the Tamarack Bench. The trail to the left (north) is signed for the Wheeler Crest. Looking down the trail to the left you will also see a large sign for the Sand Canyon mountain bike trail.

The Tamarack Lake trail ascends a low rise, passing a boundary sign for the John Muir Wilderness, and then descends to and traverses the southwestern edge of a small meadow. For the next 1.5 miles this pattern will be repeated as the trail follows an up and down course, climbing a series of moderately steep hills separated by meadow clad drainages.

This section of the trail provides access to several lakes. Reach the junction with the Francis Lake trail, heading right (south), at 1.7 miles. A short distance past the junction is Kenneth Lake, which lies in a long narrow meadow to the north of the trail. The spur trail to Dorothy Lake, turns left (northeast) at 2.3 miles. Good camping is available around Kenneth and Dorothy Lakes.

At 2.6 miles the trail descends the final hill to a large meadow. Follow the trail through the meadow past a sign pointing straight ahead for the Tamarack Lakes. The Wheeler Ridge towers along the east side of the valley. The trail now curves to the south, climbing over a wooded ridge and begins a moderately steep ascent to the Tamarack Bench, traveling through a scenic meadow along the right (west) side of the East Fork of Rock Creek.

As you climb the valley constricts and the trail is forced onto a granite bench high above the creek. To the east the sheer jagged walls of the Wheeler Ridge loom above the valley. At 3.5 miles the grade abates as the trail crosses a marshy meadow toward the headwall of the Tamarack Lakes basin.

Near the south end of the meadow the trail veers right (west) and climbs steeply up the west side of the valley on rocky switchbacks. At 4.0 miles the path turns southwest and traverses scree covered slopes to the west end of the headwall where rocky switchbacks ascend to the top of the wall. Overall the steep climb from the meadow to the top of the headwall gains 650-ft. in 0.6 miles.

Turn around at the top of the headwall for scenic views down the East Fork valley. After soaking in the views follow the trail as it heads south through rocky meadows and across granite slabs on gentle grades. The trail skirts the smallest of the Tamarack Lakes, really just a tarn, and then arrives at the north shore of upper Tamarack Lake (11,605-ft.), 4.8 miles from the trailhead.

The aquamarine lake is set in a stark, barren basin surround by a cirque of granite peaks and serrated ridges, anchored by Broken Finger Peak (13,080-ft.). Mt. Morgan (13,748-ft.) is visible through a low point in the ridge to the west of Broken Finger Peak. The western ridge is dominated by multi-hued mineral-stained peaks. Just beyond Tamarack Lake lies the smaller Buck Lake, which can be reached via an easy cross country route.

After enjoying the lakes basin retrace your steps to the trailhead. 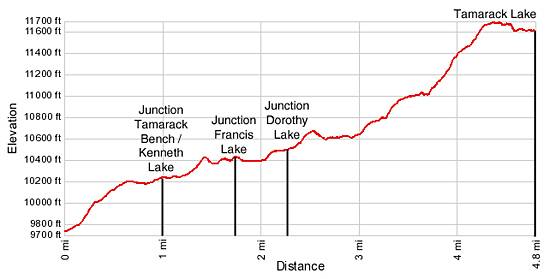 From Mammoth Lakes: Drive east on Main Street / CA 203 E for 3.1 miles and turn right onto the entrance ramp for Highway 395 S. Follow Highway 395 S for 15 miles to Tom’s Pace (aka Rock Creek Road). Turn right (south) on Rock Creek Road and drive 8.6 miles up the canyon to the Rock Creek Lake Campground access road. Turn left (southeast) and follow the road for 0.4 miles to the campground. At the campground take the right fork to the hiker parking lot.

The main hiker parking area is located adjacent to the first groups of campsites on the east of Rock Creek Lake. From the parking area find a trail heading east, cutting across a small piece of land separating the main parking area from the road and campsites to the east. Follow this spur trail for about 100-ft. to the road and look for the Tamarack Lakes trailhead bulletin board on the east side of the road between the second and third parking bay.

The main hiker parking area is located adjacent to the first groups of campsites on the east of Rock Creek Lake. From the parking area find a trail heading east, cutting across a small piece of land separating the main parking area from the road and campsites to the east. Follow this spur trail for about 100-ft. to the road and look for the Tamarack Lakes trailhead bulletin board on the east side of the road between the second and third parking bay.

Other Hiking Regions in:
California