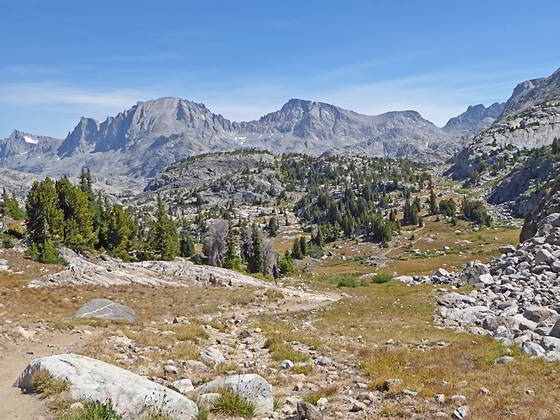 Beyond the viewpoint the grade eases a bit as the trail climbs to a saddle (10,640-ft.) on the ridge above Island Lake at 0.3 miles. As you climb you gradually lose the great views of Island Lake.

Descend a draw down the west side of the ridge on easy to moderate grades, passing a pretty pond at 0.5 miles where the peaks to the northwest offer a lovely backdrop. At the bottom of the draw the path climbs over a low rise and then crosses a creek at 0.9 miles. Past the creek traverse a small basin with views of Mount Helen, Mount Sacagawea and Fremont Peak towering above Titcomb Basin to the north/northeast.

At the top of the ridge turn around for views of Fremont Peak and Jackson Peak (13,517-ft.). Descend the hill down a rocky draw on steep switchbacks to the junction with the Seneca Lake Trail at 1.4 miles. Here the south bound Highline/Continental Divide trails branch left (southeast), climbing to Lester Pass. We turn right (northwest) on the Seneca Lake Trail.

Follow the Seneca Lake trail as it descend rocky slopes on easy grades above Little Seneca Lake’s northeastern shore and then curves left (south) around the head of the lake. The trail now travels south, skirting the lake’s western shoreline to the foot of the lake at 1.9 miles. Beyond the lake the trail heads southwest as it descends on easy grades to the head of Seneca Lake at 2.4 miles. Along the way pass the junction with the trail to Lost Lake branching right (north). There are well-used campsites around the head of Seneca Lake as well as in the area between Seneca and Little Seneca Lakes.

Follow the trail as it heads south on an undulating course along the west side of Seneca Lake. At 3.0 miles the trail climbs 100-ft. to an overlook above Seneca Lake with fine views of Fremont and Jackson Peaks rising to the north. Mount Lester (12,342-ft.) towers above the lake to the northeast.

From the overlook the trail curves to the right (west) and descends a wooded hillside to a pond at 3.8 miles, losing over 400-ft. in 0.75 miles. Here the trail turns left (south) and climbs a rocky hillside.

Soon the grade eases as the path ascends along a west side of a meadow, skirting the shore of a small pond along the way. Beyond the meadow the trail climbs switchbacks to the top of wooded saddle on a ridge.

Cross the saddle and drops down a meadow clad draw on the south side of the ridge, skirting a small pond along the way. Beyond the meadow the path descends a timbered hillside on steep switchbacks to Seneca Lake’s outlet stream, gushing down a rocky gully at 4.5 miles. Either rock-hop or wade the creek, depending on the time of year.

Climb out of the gully and follow the undulating path that wanders between small ponds and knolls as it ascends on gentle grades to the northwestern shore of Hobbs Lake at 4.9 miles. The pretty lake is ringed by small meadows and rocky knolls clad with scattered trees. Peak 11,550 rises to the northeast. Good campsites are found above the lake’s southwestern and eastern shores.

Follow the trail as it heads south along the lake’s western shore. At 5.2 miles the trail curves to the right (west) away from the lake. Soon the path curves to the left (southwest) and descends a rocky hill along the west side of a draw. Below views open to a small pond set at the north end of a meadow.

Reach the meadows at 5.6 miles where the trail crosses a stream to the south of the pond and traverses the meadow. At the south end of the meadow the path climbs switchbacks to the top of the wooded rise and then descends the hillside to a crossing of Barbara Lake’s outlet stream.

Reach the north end of Barbara Lake at 6.1 miles. Follow the trail as it skirts the lake’s western shore, reaching the south end of the lake at 6.3 miles. As you travel along the lake turn around for views of the high peaks rising to the north/northwest. Campsites are located along the south and east sides of the lake.

Past the junction the Pole Creek trail climbs over two low rises separated by a meadow. In the meadow pass the junction with the Sweeny Creek trail branching left (south) at 6.8 miles. At 7.2 miles the trail curves to the right (northwest) and ascends to Photographer’s Point at 7.5 miles. From the aptly named viewpoint a stunning panorama of high peaks fills the skyline to the north. Visible summits towering above the area between Island Lake and the upper Fremont Creek Valley include Bow Mountain, American Legion Peak, Mt. Woodrow Wilson, Mount Helen, Mount Sacagawea, Fremont Peak and Jackson Peak. Below the viewpoint is the deep canyon carved by Fremont Creek. Look carefully and you will see the south end of Gorge Lake on the canyon floor. In the mid-distance are a sea of granite knobs and low peaks.

At Photographer’s Point the trail turns left (south), passes a few ponds nestled in boggy meadows and then starts descending on moderate grades through forests and small meadows set amid rock outcroppings and granite knobs. At 8.0 miles the path turns to the right (southwest) and soon reaches a pretty meadow with nice views to the north of Mount Helen, Mount Sacagawea and Fremont Peak.

Cross the meadow and then continue the descent through trees to the meadows of Miller Park where the grade abates as the trail curves to the right (southwest), passing the junction with the Miller Lake trail at 8.8 miles. From the park enjoy distant views of the high peaks in the northern portion of the Wind River Range.

At 9.0 miles the trail re-enter the trees and soon resumes its descent on easy grades. At 9.4 miles the trail curves to the left (south), passing the boundary of the Bridger Wilderness at 9.8 miles. Past the wilderness boundary the descent steepens as the trail drops through spruce-pine forest on moderate grades.

At 10.4 miles the trail curves to the right (northwest). As you descend the grade varies from moderate to easy. You are not on the home stretch, traveling along the southwest side of the Faler Creek Valley. Soon occasional views open to the willow-choked meadows along the valley floor. Twice I have seen Moose grazing among the willows in the afternoon.

At 11.9 miles the trail turns to the south and descends on easy grade to the Elkhart Park trailhead at 12.1 miles. Here you will find an outhouse, information kiosk and large car park. The Trails End Campground is located a short distance to the northwest. (When exiting the car park, turn right to reach the campground. Otherwise turn left to reach Pinedale, WY.)

Directions from Pinedale: From the intersection of Pine Street (US 191) and North Tyler Ave (the Pinedale Tourism office is located on the northeast corner) in Pinedale, WY, drive east on Highway 191 (East Pine Street) for 0.3 miles and bear left onto Fremont Lake Road. Follow this road for 14.3 miles and turn right into the large parking area for the Elkhart Park/Pole Creek Trailhead. After the first 3.0 miles the road will turn into Skyline Drive/Forest Service Road 370740. The trailhead is located at the northeast end of the parking lot between the outhouse and the trailhead kiosk. It should take about 25 minutes to drive the trailhead. The last section of the road has some holes and uneven spots.